The Safdie brothers – Josh and Bennie – had success with their gritty crime drama Good Time. That film featured one of Robert Pattinson’s best performances. Now they  bring us another tense, slow-burn thriller in Uncut Gems. Infused with their usual street-savvy edge, the film builds to an unexpected finale. The brothers bring a gritty Scorsese-like energy to the material. 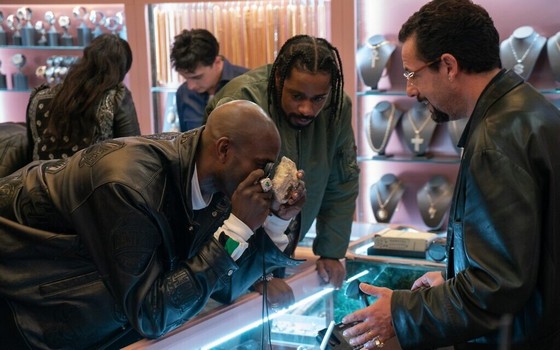 Howard Ratner (Adam Sandler) is a jeweller who works in New York’s famed diamond district. He’s also a compulsive gambler who’s always on the lookout for the next big score. He’s heavily in debt to Arno (Eric Bogosian) and a number of other loan sharks who would happily break bones to make a point about paying debts. Howard thinks he’s on winner when he comes into possession of a rock bearing uncut rare opals, smuggled out from a mine in Ethiopia inside a fish.

Howard loans the opal out to basketball star Kevin Garnett (the Boston Celtics star playing himself) as a good luck charm. But when Garnett fails to return the rock, Howard finds himself in deep water. In desperation, he calls in favours from a number of unsavoury characters to try and keep afloat. He takes enormous risks to capitalise on his money-making gamble and lets it all ride on one last desperate but potentially lucrative gamble.

Adam Sandler has made a name for himself as the star of crass comedies, and while often hits at the box office they’re probably not very challenging dramatically. But in this relentless and tense drama he delivers, arguably, the performance of his career. If Uncut Gems had been made thirty years ago it would easily have starred someone like Al Pacino. Fittingly, Sandler brings that same level of sweaty intensity to the role of the self-destructive Howard. He effectively captures Howard’s increasing sense of desperation, anxiety and manic energy as he juggles many balls.

Bogosian (Talk Radio) is terrific and brings an air of menace to his performance as Arno, the vicious loan shark. The cast also includes LaKeith Stanfield (Knives Out), Idina Menzel (Frozen) as Howard’s embittered wife Dinah, as well as cameos from rappers Weekend, Ca$h Out and Trinidad James.

Darius Khondji (Midnight In Paris) shot the film (in 35mm) on location on the bustling streets of New York itself. He also uses tracking shots and hand-held cameras to bring another level of energy to the material. He also suffuses the film with a bluish tint that recall the low-budget noir dramas of the 80s.

Uncut Gems is the diamond in the rough, the jewel in the crown for Sandler’s career.