A slow-moving, intense jigsaw puzzle, a mood of unease permeates nearly every scene in UNA. Based on David Harrower’s Olivier Award-winning one-act play Blackbird, the film follows a young woman’s journey to reclaim her past.

Fifteen years ago, 13-year-old Una ran away with and had sex with an older man, Ray – a crime for which he was arrested and imprisoned. When she comes across a photo of him in a trade magazine, Una tracks him down and confronts him at his workplace. Her abrupt arrival threatens to destroy both of them. Unspoken secrets and buried memories surface as Una and Ray sift through the wreckage of the past. 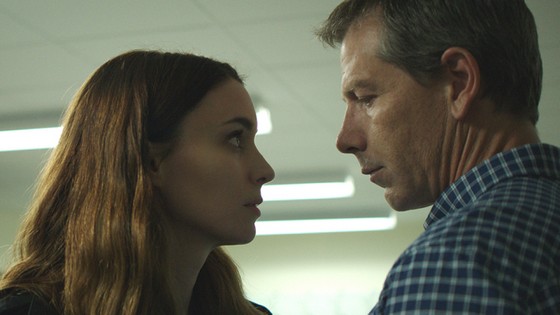 UNA marks the feature film debut of Australian director Benedict Andrews, whose theatrical credits include the 2014 Young Vic production of A Streetcar Named Desire and Sydney Theatre Company’s The Maids.

Andrews was inspired by films such as Hiroshima Mon Amour, which evokes the way the past co-exists with the present. The film works as a kind of reversal of the “Lolita” myth. Whereas Lolita describes its taboo relationship purely from the perspective of the male seducer/groomer, UNA is experienced from the point of view of the girl and the woman she becomes.

It takes hold of you and doesn’t let go … drip-feeding snippets along the journey.

There’s no questioning the intrigue. Exactly what happened, when and where and what were the consequences? All these questions are answered – slowly and deliberately – through flashbacks and the present-day action.

Much of the latter takes place in Ray’s cavernous work environment. The space seems positively endless, with relatively few people working within it. I found the lack of staff convenient, but not particularly plausible.

A “hide and seek” ploy is used as a device to add to the tension. The twists and turns of plot keep us guessing as to just where this is going.

The rawness of Rooney Mara’s portrayal isolates the years of heartache Una has faced. Ben Mendelsohn meanwhile has an uncanny ability to draw a persona of Ray you don’t revile. They bring credibility and gravitas to their respective roles.

For all the positives, I wasn’t entirely satisfied with the ending, which I found to be relatively tepid. It left as many questions as it answered. Nevertheless, the lion’s share of UNA is a solid tale of forbidden lust. It provides an insight into the devastation acting on impulse can wreak. Rated M, it scores a 7½ out of 10.