What a night; laughs galore, some of the funniest characters you’ll ever seen on a stage, amazing comic performances from a superb cast, brilliant set, lighting and costumes, a whole heap of catchy new music from Tim Finn and finally a well deserved and triumphant standing ovation.

Shakespeare would have been applauding in his grave. He would have loved Sam Strong. He would have seen that the director understood what he was trying to say and had the ability to glean all the comedy he wrote in the script. He would also have envied the amazingly talented women in the cast. Willy could never have had it so good. 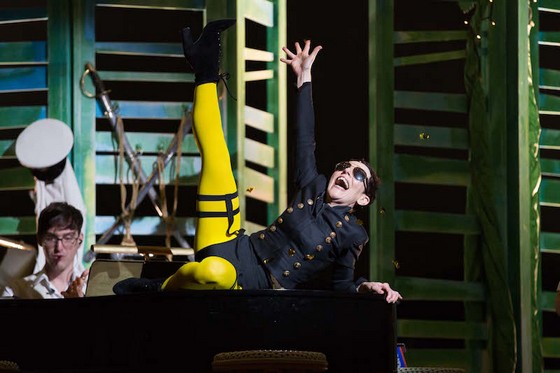 This production follows the wild and wonderful style set by Much Ado About Nothing which Jason Klarwein directed so successfully in 2016. Every type of comedic devise was used from slapstick to Shakespearean wit and a few modern asides. To top of this immensely entertaining slice of comedy the musical interludes, played on stage by a four-piece band, that were added to Shakespeare’s original script have been given a modern makeover by Tim Finn, who also composed several new numbers to make the show a Shakespearean musical as opposed to a musical based on Shakespeare. And the new works blended beautifully with the play

The plot is a kaleidoscope of changed identity, mistaken identity, unrequited love, booze and bawdiness: Viola is shipwrecked on the coast of Illyria and has lost contact with her twin brother, Sebastian, who she believes to be drowned. She disguises herself as a young man under the name Cesario, and enters the service of Duke Orsino.

Duke Orsino has convinced himself that he is in love with Olivia, who is in mourning and refuses to accept love or marriage proposals from anyone. Duke Orsino then uses ‘Cesario’ to profess his love to Olivia. Olivia, however, falls in love with ‘Cesario’. Viola has fallen in love with the Duke Orsino: Viola loves the Duke, the Duke loves Olivia, and Olivia loves Viola disguised as Cesario. What a cheerful mash-up ripe for fun.

Creating more mayhem in between are the loveable rogues Sir Toby Belch and Sir Andrew Aguecheek and Olivia’s dour servant Malvolio who is disliked by all.

The maid Maria plays a trick on Malvolio. They convince him that Olivia is secretly in love with him by planting a love letter, written by Maria in Olivia’s handwriting. It asks Malvolio to wear yellow stockings cross-gartered, to be rude to the rest of the servants, and to smile constantly in the presence of Olivia. Malvolio finds the letter and reacts – well it has to be seen to be believed!

Sam Strong cast Christen O’Leary, who was also in Much Ado, in the male role. Is there nothing that woman can’t do? The letter scene is so hilarious it brought tears to my eyes and thunderous cheers from the audience at the end. It was simply brilliantly played, a sparkling gem of a comic performance, and when she appeared in the yellow stockings and leotard and danced, flashing everywhere, it produced another riot of laughter. Was she male or female? It didn’t matter, we just laughed 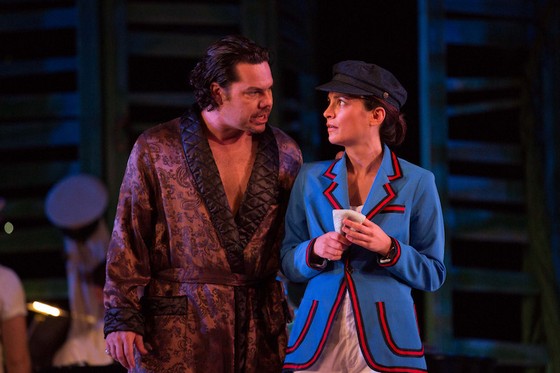 Other refugees from Much Ado were Liz Buchannan, who was a delight as Olivia, Bryan Probets as Sir Toby Belch, Kathryn McIntyre as Maria the maid and Jason Klarwein who switched from director to actor to play Duke Orsino.

Probets is always value for money whether he is dramatic or comedic, his timing is always prefect as so is his drunk act; classic stuff as he worked a double act with Colin Smith as Sir Andrew and sang beautifully too. Credit also goes to Sandro Colarelli, who as The Fool Feste did much of the singing. Klarwein too was great and he played gleefully with the delightful Jessica Tovey as Viola/Cesario. What fun she was with once again great comic timing in vocal tones and body language. But everyone was on top of their role; if ever a director picked a perfect cast, this was it.

For trivia fans, the “clichés” that came from this play are: “Some are born great, some achieve greatness, and some have greatness thrust upon them” and “If music be the food of love, play on”.

Queensland Theatre’s Twelfth Night is showing at the Playhouse Theatre, QPAC in Brisbane till 19 May 2018. For bookings go to www.queenslandtheatre.com.au or phone 136 246.