Trustees is an obscure work that’s bound to polarise audiences. It’s also bold, audacious and evocative. I’m not convinced I made sense of it all.

When the 90-minute play starts, five actors appear on stage One is a moderator, and the other four are on either side of a debate hosted by a (fictitious) body called the Melbourne Trust Forum. The topic: “Government funding of the arts has done more harm than good”. The debate comes on the back of a major policy shift. The government has announced a moratorium on funding for performing arts organisations Australia-wide. 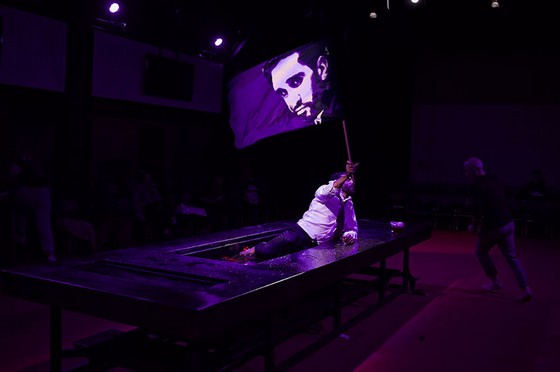 The moderator is obnoxiously peppy and goes by the name of Julius Miller (Hazem Shammas). Shammas spoke so fast he literally tripped over his words at one point and at times it was difficult to make out what he was saying.

At this point, the whole thing felt fake. After a supposed audience vote on the debate (not!), we morph to the second scene. Around a boardroom table, the trustees of Melbourne’s (also fictional) Lone Pine Theatre Company gathering to kill off the company in the wake of the funding drought. One of the trustees proposes that this is a time to fight and not cower. With it comes one outrageous motion after another about how to revive the company. Hilarious stuff.

Just when everything’s a little more comfortable comes another scene change. Now a new Australian Prime Minister (Daniel Schlusser) – or is that merely the new head of the Lone Pine Theatre Company? (I couldn’t tell) – has been elected and he wants to have his way with an indigenous Australian woman. Mind you, not before feasting on forbidden fruit with his cronies. He talks dirty and strips naked, cavorting and spouting bile.

The proud Tasmanian aboriginal woman (Tammy Anderson) stands tall and refuses to be judged, stripping off and encouraging us to really look at her. Then another politician (Natasha Herbert) talks about why the profession may not be for her, although she most certainly wants the system governing the country to change. She also talks about her sexual awakening post-age 50.

Next, the indigenous woman quizzes a Muslim (Hazem Shammas) as to whether he – like her – has seen someone die. He launches into a diatribe, losing himself in a story about his father and how he enjoyed bread dipped in honey.

A quick bit of audience participation follows, moderated by a vivacious young woman (Niharika Senapati), after which she dances up a storm to a strong rhythmic beat before being forcibly strung up by the legs. Then she relates the shame she feels for her existence compared to that of an Afghan refugee who committed suicide because he could take his treatment no more. He felt he had no other options left. 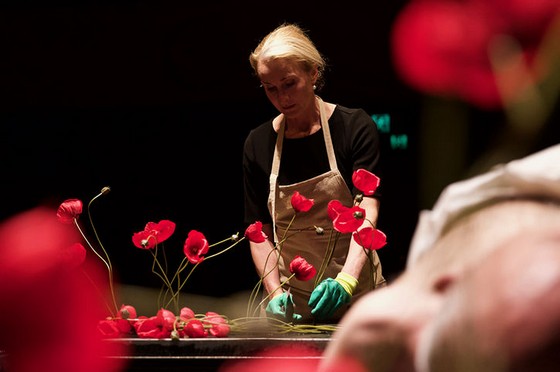 Suddenly, we’re back to a pop quiz about the coffee culture of Vienna versus Melbourne, before the overhyped emcee asks for the one word that Australians keep too silent about. A news reader talks about the world happiness index and the curtain falls.

Political theatre outlaws Natalia Kaliada and Nicolai Khalezin of Belarus Free Theatre, together with Daniel Schlusser and the rest of the cast, wrote Trustees. Kaliada and Khalezin also direct. Reading the program blurb, I gather it’s meant to be an observation of current issues through the prism of heritage.

While the play has urgency and relevance, I can’t say I particularly appreciated its style or execution. It was far too vague and esoteric for my liking. But around me, patrons were genuinely caught up in it. A number even gave it a standing ovation. I say enthusiasm is one thing and accessibility another entirely.

Trustees is playing at Beckett Theatre at Malthouse Theatre until 21 October 2018.