Irish hatred of the British propels a fantastical take on the life and times of bushranger Ned Kelly.  Part lyrical, part punk rock, this is a liberal interpretation of a man who became famous in his own lifetime. 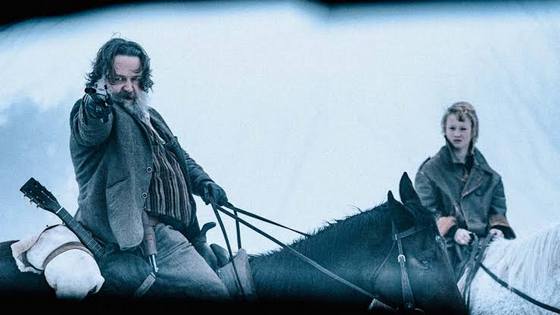 I tell you, his mother was a real piece of work, according to how she is represented here. Throughout his life, Kelly had a love/hate relationship with her.

When Peter Carey’s Booker prize-winning novel True History of the Kelly Gang arrived in 2000, it exploded the myth behind Australia’s most celebrated bushranger. Now through Justin Kurzel’s (Snowtown) visionary eye (and a screenplay by Shaun Grant), we see a film which refuses to be familiar or sentimental. Instead it throws us into the world of this extraordinary outlaw … and his tragic descent into the heart of darkness.

This is a journey from the innocence of a boy wanting nothing more than to protect and provide for his family to the iron-clad hostile who builds an army of sorts to destroy those in the way of freeing his mother from prison.

The film focuses on the tender and volatile relationship between Ned and his mother, Ellen (Essie Davis), spanning both the younger years of Ned Kelly (Orlando Shwerdt) and the time leading up to his death, as portrayed by George Mackay.

Ellen is a matriarch whose own loneliness controls the destiny of her eldest son. She feeds him with love and affection when she feels him drifting away, but guilt and shame when he reaches for a better life. Haunted by the maddening decline of his tortured father Red (Ben Corbett), Kelly is groomed and nurtured by the infamous bushranger Harry Power (Russell Crowe).

He is hounded and hunted by the force of the law, as represented by Sergeant O’Neill (Charlie Hunnam) and Constable Fitzpatrick (Nicholas Hoult). Kelly also finds comfort in the arms of a young lady of the night, Mary Hearn (Thomasin McKenzie).

Mackay is particularly impressive, inhabiting the mindset of a man who wanted to improve his station in life but was simply drawn back into the cesspool his mother created around her. Davis is compelling as the personification of misguided parenting.  Hoult is unforgettable as the twisted British copper feigning propriety and righteousness. Crowe makes his presence felt in a smaller role as Kelly’s unhinged mentor.

The filmmakers appear to have a fascination with cross dressing for, dare I say, it plays a significant part in proceedings.

True History of the Kelly Gang may be a misnomer, but I appreciated the creativity and endeavour involved in this production. It pushed the limits but maintained interest throughout.  Mind you, its obscure nature won’t suit everyone. I suspect many will find it a bridge too far. I, on the other hand, applaud its style.

True History of the Kelly Gang is now on in cinemas, before appearing on Stan on Australia Day – January 26th. Rated MA.