After jaunts through northern England and Italy, Steve Coogan and Rob Brydon embark on another culinary road trip. This time, the guys head to Spain to sample the country’s gastronomic offerings in between rounds of off-the-cuff banter. Over plates of pintxos and paella, they exchange barbs and their patented celebrity impressions. 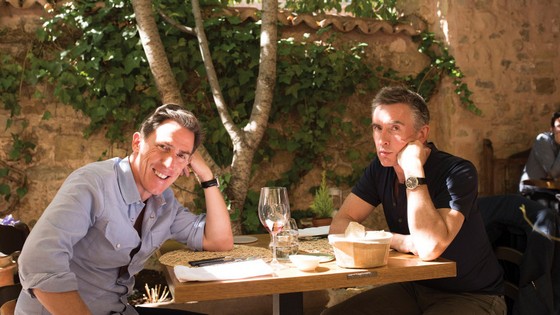 Fun, but overly indulgent, this third installment is again filled with great vistas, sumptuous food and takeoffs between mates trying to outdo one another. The cinematic adventure began seven years ago, with a further offering in 2014; and now this.

Steve Coogan’s character is arrogant and self-centred. Rob Brydon knows he is second fiddle, but embraces his role heartily. Humour is an integral part of the dynamic, but so too is the fact that Coogan and Brydon get on each other’s nerves.

As presented here, the pair are in different phases of their lives, although both are middle aged. Coogan – whose character has a 20-year-old son – is having an affair with a married woman. Brydon is happily married with two young children, having embraced fatherhood later than many. Just remember that these are roles the duo play for the cameras. It’s not reality, even though it is meant to appear – and does appear – as slice-of-life.

The Trip to Spain is beautiful to look at, with the cinematography by James Clarke an undoubted feature. It doesn’t matter whether you’ve seen the earlier episodes. You can still readily embrace and appreciate this one. I simply found the patter too much the same. As clever as the impersonations were, they, too, became a tad tiresome.

I was far more interested in Coogan’s rather sad personal life and professional fall from grace (again, all part of the created persona), which could have been developed further. Fewer stops would have reduced the nearly two hour running time to a far more serviceable 90 minutes. Surely this is where director Michael Winterbottom could (should) have stepped in. I found myself looking at my watch from halfway through.

Still, The Trip to Spain remains a pleasant enough distraction, if nothing more. Rated M, it scores a 6½ out of 10.