If you can follow the intricate (at times maddening) plot in Transformers: The Last Knight then “You’re a better man than I, Gunga Din!”. At least that is until Anthony Hopkins’ character pulls together the threads well into the film. It is the fifth film in the series, following on from 2014’s Transformers: Age of Extinction.

Here is what I know and what I can tell you. Humans and Transformers are at war. Transformers remain outcasts. Governments the world over have formed what is called the Transformers Reaction Force (TRF), whose mission it is to hunt down and destroy all Transformers. Optimus Prime is no longer. 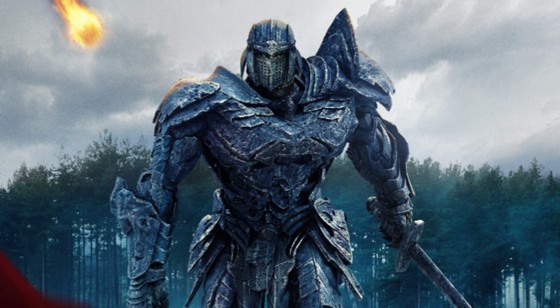 The key to saving our future lies buried in the secrets of the past, in the hidden history of Transformers on Earth. It dates back to Merlin, King Arthur and the Knights of the Round Table.

Saving the world falls upon the shoulders of an unlikely alliance, that between Cade Yeager (Mark Wahlberg), a failed inventor; haughty Professor of English Literature at Oxford University Viviane Wembly (Laura Haddock); and Autobot Bumblebee. It is orchestrated by astronomer and historian Sir Edmund Burton (Hopkins), whose deep-seated knowledge of the Transformers time on our planet is second to none.

Transformers: The Last Knight also features Josh Duhamel as a US military colonel and unwilling member of the TRF, Stanley Tucci as Merlin and John Turturro as a former government agent hiding out in Cuba.

The two and a half hour running time is a real test of endurance. It certainly didn’t need to be that long. The woman sitting next to me was on her phone for at least half the film and even though that is something I abhor, I can understand why.

The cuts from one country to another are very difficult to follow and to get your head around. While some of the comic asides generated chuckles, much of that too was quite lame. The sexual tension between Yeager and Wembly is transparent, schoolboy stuff. Still, it gives us something to hang onto alongside the pyrotechnics.

As to the effects (one of the hallmarks of the franchise) they were – indeed –most impressive.  Clearly a great deal of work has gone into making these the biggest and boldest yet.

Director Michael Bay (Pearl Harbor) doesn’t hold back. Transformers: The Last Knight becomes a big-budget, blast-its-way-into-our-psyche, exercise. Bay isn’t known for restraint or subtlety. This just felt like an assault on the senses – a random, chaotic blancmange. Rated M, it scores a 3 out of 10.