How’re you feeling? Winter getting you down a little? Yeah, I know the feeling. All you want is a big warm hug, right. Well, I can’t give you that, but I can suggest you seek out the cinematic equivalent, Toy Story 4. The latest installment in the wildly successful animated franchise is like pulling on a favourite jumper and tucking into some comfort food.

While the film brings back all the well-loved characters from the earlier films, its focus is a little different. Woody (as usual) is the main character but this time in tandem with Bo Beep. Buzz is largely sidelined and poor Jessie barely gets a look-in. But the filmmakers have introduced several new characters to add colour and depth to the story. 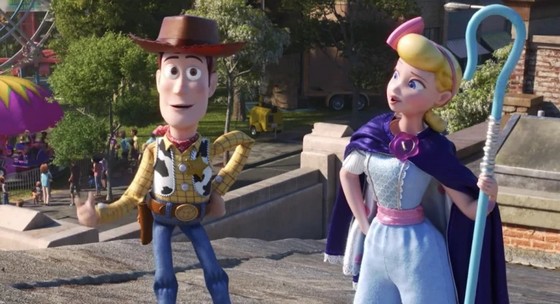 You might remember that at the end of Toy Story 3 (spoiler alert!) the now-grown Andy gifted his toys to Bonnie (voiced by Madeleine McGraw). Back with a young child, Woody (Tom Hanks) struggles to adjust. He’s no longer top dog, with Bonnie preferring Jessie (Joan Allen) or one of the other toys. Then Bonnie heads off to kindergarten orientation day. There she crafts a “new friend” – Forky (Tony Hale). He’s literally a plastic fork with googly-eyes and pipe-cleaners for arms. But Bonnie loves him dearly. With the start of the new school year looming, Bonnie’s parents decide to fit in a last road trip. They travel to a quaint small town with a carnival. Along the way, Woody tries desperately to protect the flaky Forky, but he keeps either getting lost or into trouble.

Once in the town, Woody passes an antique store where he spies what looks like Bo Peep’s lamp. It’s the same lamp; but Bo Peep (Annie Potts) has long since gone. She’s living the free-wheeling life of a lost toy inside a mechanical skunk (it’s a long story…). In the antique store, vintage doll Gabby Gabby (Christina Hendricks) has designs on being with a real child instead of gathering dust on a shelf. But that requires a working voice-box; just like the one Woody has. After her initial effort to grab Woody’s voice-box fails, Gabby Gabby snares the bumbling Forky as leverage. To get Forky back to Bonnie, Woody and Bo Peep – with a little help – need to bust him out of Gabby Gabby’s clutches. But it won’t be easy. Her cadre of creepy ventriloquist’s dummies guard the store day and night.

Despite its familiarity, Toy Story 4 barely flags. The script by veteran Andrew Stanton and newcomer Stephany Folsom skips along for the most part. Maybe they included one or two twists too many, but that’s a minor quibble. Economy marks the plot, with very little wasted effort. Josh Cooley makes his feature film debut as director and handles the material with great care.

The film’s masterstroke though lies in three brilliant bits of casting. Key and Peele – yes, Keegan-Michael Key and Jordan Peele – voice conjoined toys Ducky and Bunny. They’re fantastic. But then, prepare to have your mind blown as Keanu Reeves voices the most-Keanu-Reeves character ever in Duke Caboom, an action figure of Canada’s most famous (!) daredevil.

If you teared up in Toy Story 3, you may need the tissues again. Sure, it’s manipulative and it’s expected; but it wouldn’t be a Toy Story movie otherwise.

The ending is, well, enigmatic. It’s not really a cliff-hanger as such, but it resets the characters in such a way that it leaves options for the future. So I don’t think this will be the last we see of Toy Story, though the settings and characters may change.

For now though, snuggle down with this visually beautiful film.I’m sure parents won’t be able to avoid it in the coming school holidays; but why would you want to? Embrace it.