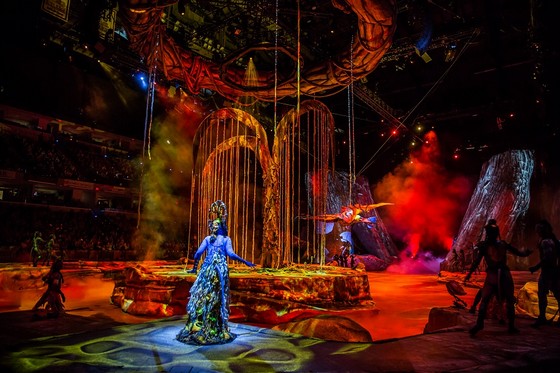 It begins with a mound becoming a mountain. Several scenes are magnificently realised. And that is not to overlook the costumes, make up and props, which are superb … and all this set to an original soundtrack. Puppetry (there are 30 puppets in all) and kite magic (with 18 kites) create prehistoric creatures on the ground and in the air.

The dexterity that is the hallmark of the world’s greatest circus is not lost either. The performers run, scramble, tumble, climb, drop and balance precariously as the story develops. Five atop a dinosaur seesaw is among the many highlights.

But, don’t expect a series of acts in the traditional sense of the word. Rather, Toruk is driven by a narrative which isn’t always easy to follow. No other Cirque show has used a narrator. In this case, he gives context to what we are witnessing.

The storyline is borne of fear. When a natural catastrophe threatens to destroy the sacred Tree of Souls, two boys on the brink of adulthood decide to take matters into their own hands. After learning the great flying creature Toruk can help them save the tree, they don’t hold back. They set out, with a newfound female friend, on a quest. High up in the Floating Mountains, they must find the mighty red and orange predator that rules the Pandoran sky. The talent converse in the fictional Na’vi tongue.

The technical requirements of a show like this are astounding. Just to lug all the equipment around, to set it all up, secure it and double check it requires a small army. 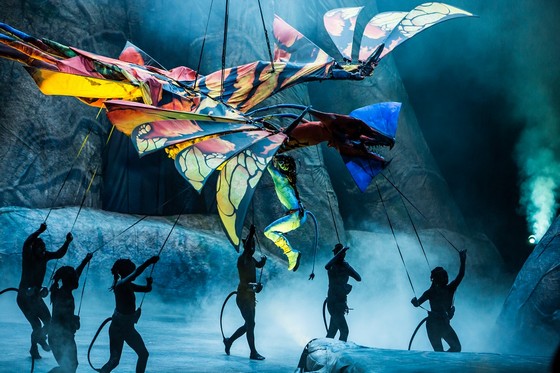 The men behind the piece are directors Michel Lemieux and Victor Pilon, and they deserve great credit.

Toruk – The First Flight is a unique piece of high quality entertainment. Rich in folklore, it serves as a kind of prequel to Avatar. It is playing at Rod Laver Arena in Melbourne until 12 November, before moving to the Adelaide Entertainment Centre between November 16 and 19, finishing up at Perth Arena from 24 November to 3 December 2017. You can get tickets here.