Jim Cummings gives a bravura performance as a man on the edge in Thunder Road. This offbeat drama concerns a small-town US police officer who suffers a breakdown after the death of his mother. Cummings wrote and directed the piece, and appears in almost every scene. It’s based on his short film of the same name. 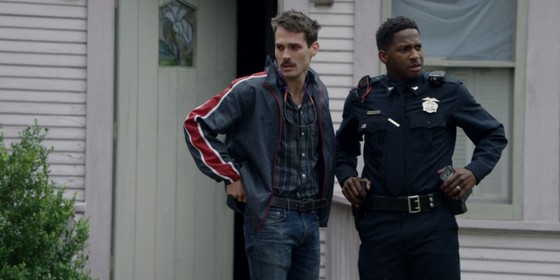 We start with Officer Jim Arnaud (Cummings) delivering an unexpectedly shattering eulogy at his mother’s funeral. It’s unlike any other tribute I’ve heard. It smacks of loss, adulation and a cry for help. His mother was an accountant and dance instructor. Her favourite artist was Bruce Springsteen, but in Arnaud’s state he can’t even get his 10-year-old daughter Crystal’s (Kendal Farr) pink boombox to play mum’s favourite Springsteen song, “Thunder Road”.

Arnaud admits he and his mum gave each other hell and he wasn’t the easiest child. Now he’s having trouble coping with it all. His wife Rosalind (Jocelyn DeBoer) has left him and is with another man. She’s now filling for divorce and full custody of their daughter. Arnaud also experiences disciplinary problems at work and that situation is set to escalate. His sense of profound loss has overtaken his life.

Moments of tenderness and sentiment punctuate the cringe-inducing laughs. I felt helpless watching this train wreck, wondering what could help the situation. His police partner – Officer Nate Lewis (Nican Robinson) – reaches out to him, but can’t change his fate. In fact, I think Arnaud had deep psychological problems before his mother’s passing. How was ever allowed to join the police force remains a mystery.

What we see is rough and raw but Cummings and his cast make it real. I suspect the subject matter will make Thunder Road a film with small audience appeal, but that doesn’t make it any less worthy.