“Rebecca waited for the ferry staff to give her the all-clear to walk down the gangway. She felt a thrill of anticipation at finally setting foot on the island. There was something else, too, a voice breathing over her in the faint breeze. She liked to think it was saying Welcome home, Rebecca but it could just as easily have been saying Go home.” 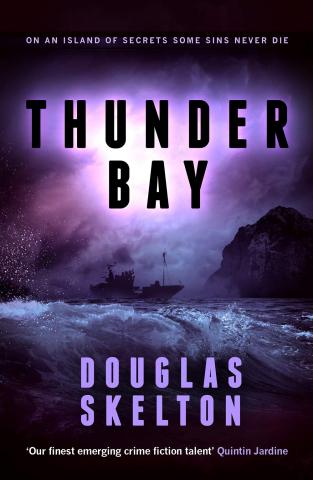 The islands off the west coast of Scotland can be both beautiful and inhospitable places. On one hand there is the stunning scenery, rugged coastlines, deserted beaches and, on calm sunny days, a light which seems like it has been painted on the landscape. On the other, there are the storms from the Atlantic with their gale force winds and driving rain. The locals too share this paradox, at first appearing welcoming but it’s soon obvious that some of them would rather not share their island with incomers or mainlanders and would love those storms to blow the unwelcome visitors back to where they came from.

An island like one of these is the setting for Douglas Skelton’s Thunder Bay, the island of Stoirm, with Portnaseil, it’s only town, rising up out of a protected harbour on the east coast of the island and a single main road called the Spine. When Rebecca Connolly, a journalist employed by a small Highland newspaper, receives a tip that a big story is about to break on Stoirm she wants to cover it. Connolly also has personal reasons for visiting Stoirm because her late was father was born there and after leaving at the age of eighteen, he never visited or spoke of the island again.

Although Rebecca Connolly is the main character in Thunder Bay and a large part of the novel is told through her eyes, we are also told the story through the eyes of a number of other characters in the novel. This form of multiple narration works extremely well in Thunder Bay because it reflects the nature of life of small isolated islands where secrets are closely guarded and when shared, only whispered. You may have noticed at that I’ve said very little about the story itself or even who some of the other characters are. I’ve done this deliberately because Thunder Bay is the kind of story which works best when the secrets are revealed to the reader and not by the reviewer. I will however include one warning about Thunder Bay which is that it does include incidences of domestic violence.

Thunder Bay is not only a thoroughly enjoyable thriller it also a novel which manages to explore other themes including the slow demise of newspapers and the development of larger estates at the expense of the rest of the population.