At age six months, three identical male siblings are adopted out to three different families by a now defunct adoption agency. The reason they are separated has to do with a bizarre nature-versus-nurture experiment, the results of which are never published. In a nutshell, that’s the documentary Three Identical Strangers. 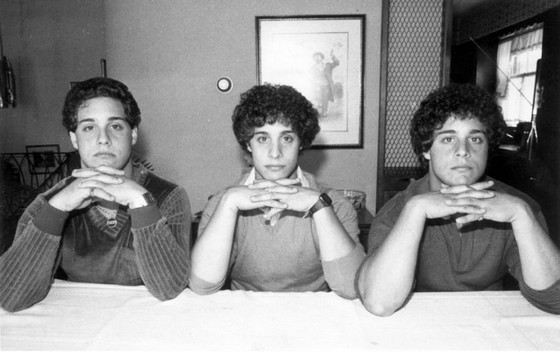 The trio – Edward Galland, David Kellman and Robert Shafran – were born to a single mother in 1961. Only by a quirk of fate does one brother discover he has one identical brother; let alone a second. That happens when he goes to college and is warmly greeted by students who think they know him.

The trio seem genuinely delighted to have found one another and become inseparable … partying hard and going on to set up a thriving business together. Life appears rosy – only dig a little deeper and it’s far from it. Their adoptive parents are angry they were misled by the adoption agency, which never revealed the children were separated. Further, the secretive nature of the science project remained a mystery.

Only later in the documentary are the psychological effects of the separation revealed; and they are deeply disturbing.  A highly regarded and credentialed psychiatrist was literally playing with people’s lives, something he was never seemingly been held to account for.

The work is by BAFTA-nominated filmmaker Tim Wardle. He’s created a fascinating and frightening piece, which unfolds through a series of reveals. Three Identical Strangers includes interviews with two of the siblings and their adoptive parents, relations and friends and an investigative journalist.

I was left with an understanding of the impact that the gross abuse of power had on those who were unfortunately caught up in the web. And the subterfuge continues to this day. To find out how, you’ll need to see Three Identical Strangers.