Slingsby’s production of Oscar Wilde’s The Young King (adapted for the stage by Nicki Bloom) is a deceptively simple but lusciously layered show. That is once the acclaimed Adelaide theatre company’s show actually starts as before the audience makes it into the theatre space, things begin with an immersive entry process through the Cremorne Theatre foyer stairways and spaces, guided by the young king’s courtiers from QUT Creative Industries. As we are divided into sections of the unnamed kingdom, instructed on how to greet the young king and taken to his costumier to arts and crafts our own coronation hats, we are brought into the world of the show and its kingdom created in the short story that Wilde wrote for his children as part of his House of Pomegranates collection of fairy tales … even if the foyer areas and ‘corridors of secrets’ are not the most accommodating as the immersive space and there is a lot of idle time waiting around for other groups. 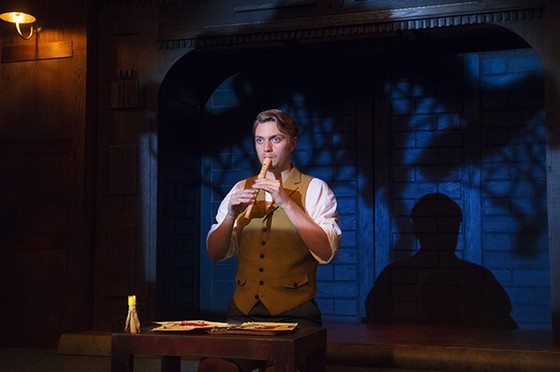 It is well over 30 minutes before the coronation celebration in which we, as esteemed citizens of the fine kingdom, have been invited to partake begins as representatives from each of the groups, the fisher folk of the north, industrious denizens of the south, forest folk of the east and prospectors of the west present gifts to the king in the first of many opportunities for children’s participation in the show. Things continue with the Young King’s (Lachlan Barnett) share of his story of being born to a princess and a poor woodland man, snatched from his parents as a baby and raised by a kind goatherd in a deep forest before, the old king, nearing the end of his life, calls the boy back to the palace for revelation of his birthright.

Treasures and privileges are laid at the young king’s feet, but result in his internal struggle about the cost of these to others. Although he has been raised in poverty, after he becomes king, he thinks only of rare and beautiful object until his attitude changes radically after he has three bad dreams resulting in a metamorphosis to recognition of the heart rendering struggle of the poor, exploited by the rich. The theme of compassion clearly resonates, drawing together the three things we are told to remember well by the courtiers… examine the secrets that are entrusted to you, remember where you have come from and look to what is inside yourself. Indeed, The Young King is quite lovely and richly rewarding not only from a thematic, but also an aesthetic perspective.

The show’s magical stagecraft is whimsical in a way that befits Wilde’s luxuriously tender language, but also very beautiful and still accessible, even to younger audience members (the show is suitable for ages eight and up, through it will appeal to adults also). There is an exquisite simplicity to the captivating world created from the delightful piano score (Musician Joshua Belperio) and lighting enlivens intimate and focussed moments including through the use of shadow play and hand-held torches. Inventively detailed nooks and crannies appears as if by magic to the wonderment of the audience, making watching the enamoured faces of younger audience members one of the highlights. 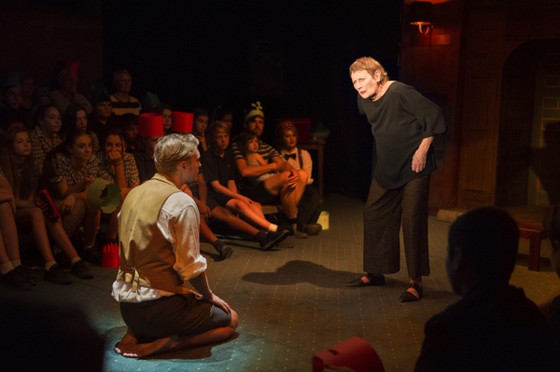 Barnett handles the multi-faced role of the 16-year-old king with finesse, making him likeable and engaging. And he is expertly assisted by Genevieve Picot who adopts an array of additional characters, without addition of costumes. While she embodies them all with unique characteristics, it is her rickety old king that is most memorable as example of her diverse talent.

The Young King represents a unique theatrical event, more experience than show as audience members operate as participants rather than just spectators, not just at the coronation event and its lead up, but in exit through the stage’s enchanted forest and backstage areas. The Brisbane stop of its national tour may be quick but it should not be missed by young and young-at-heart audience members alike, who like their theatre to have a touch of magic.