Coping with death and significant illness resulting in death isn’t easy for anyone. When it affects one’s nearest and dearest it is particularly harrowing. What if inside two years both your spouse of nearly four decades and adult child pass away? How would/could you handle that? In an instant, life as you had known it is no more and can never be again. The Year of Magical Thinking deals with just that situation.

It reflects upon what happened to essayist and author Joan Didian, who has written the play based upon the memoir she wrote and was first published in 2005. For her efforts, she received a Pulitzer Prize nomination.

On 30th December, 2003 Didian’s husband, novelist, screenwriter and literary critic John Gregory Dunne dies suddenly. Her newly married daughter Quintana suffers through several bouts of emergency hospitalisation before succumbing on 26th August, 2005. There is no sense of fairness about any of this, but then life can be mighty cruel.

The Year of Magical Thinking takes us – chapter and verse – through what happened and when. It deals with how she and her sick daughter played games with themselves in the belief that not acknowledging elements of their husband/father’s passing somehow meant he hadn’t really gone forever … that the situation is open to revision.

In Didion’s case that saw her giving away some of his clothes, but not his shoes … because he would need those when he returned. That concept is what led to the term “the year of magical thinking”.

Didion acknowledges that at one point she returned to work, but it quickly became clear to her that she wasn’t up to doing so. She reflects upon the times she shared with her husband and daughter as well as the fine detail of what went down after he died and she was hospitalised. She recalls how John maintained she always had to have the final word and how he had a premonition that his time on Earth was about to reach its “use by” date. She remembers how he had to fight for their final trip to Paris.

Dressed in a simple black top and taupe slacks, Jillian Murray is never anything but calm and measured as she recounts her journey to hell and back, pausing ever so briefly and shedding tears along the way. It is an illuminating hour and a half of theatre without interval – a one person show par excellence. It is just her, a wooden chair, alongside of which sits a small table with a glass of water … and some lighting and sound effects by Andy Turner and Darius Kedros respectively. 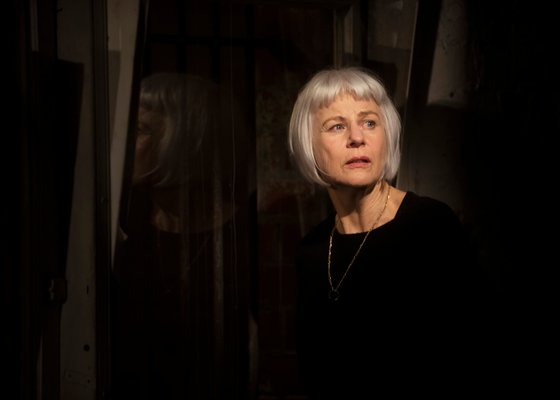 Still, notwithstanding a fascinating and insightful script and a captivating performance, I found 90 minutes a stretch. Some of the detail was wearing, at times meandering and superfluous. I recognise Didion saw it as important, but there were moments I tuned out. A tighter, hour-long performance would have gone down a whole lot better with me.

Directed by Laurence Strangio, The Year of Magical Thinking is on at fortyfivedownstairs until 17th November, 2019.