Moving from cinema releases to Netflix hasn’t really slowed Adam Sandler’s production company Happy Madison. They currently have 14 movies in the pipeline. But the latest HM production to make it to the small screen is The Wrong Missy. This crashingly predictable rom-com fails on just about every level – but completely unpredictably unearths a new comic star in Lauren Lapkus.

Just where this movie goes wrong is hard to pinpoint. Maybe casting the 50-something David Spade opposite the 30-something Lapkus could be it? Or hiring TV writers Chris Pappas and Kevin Barnett (who worked together on the well-received The Righteous Gemstones) to write a movie? Perhaps green-lighting their paper-thin script? Or forgetting that comedy is more than just pat jokes? I guess we’ll never know, but the result is definitely underwhelming. 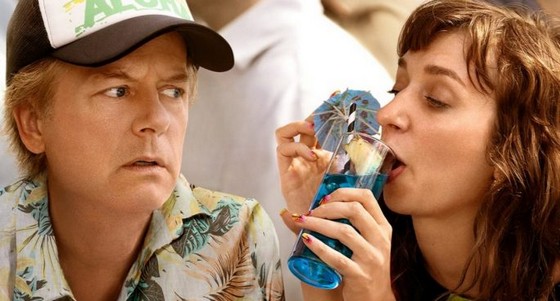 That said, Lapkus (Orange is the New Black) is brilliant as the titular Missy. She throws herself (often literally) into every scene with a fierce comic energy that the pale screenplay really doesn’t deserve. In the process, she easily outshines a cast of experienced but admittedly B-list comic talent. That includes Spade, who seems mostly uninterested in the whole thing. In his defence though, his character serves mostly as just a sounding board for the manic Missy.

In the opening scene, finance company exec Tim Morris (Spade) goes on a disastrous date with Melissa – a.k.a. Missy (Lapkus) – after being set up by his grandmother. Soon after though, it seems luck has smiled on Tim as he meets former beauty queen Melissa (Molly Sims) via an airport mix-up. Tim and Melissa have the same tastes in books and music, leading Tim to hope for another chance after Melissa has to catch her flight home. Tim’s company has recently merged with another financial provider, and the new boss Jack Winstone (Geoff Pierson) has to choose a new head of sales. It’s between Tim and Jess (Jackie Sandler) – known as The Barracuda. The outdoorsy Winstone decides to settle it at the company retreat in Hawaii.

With partners allowed to come along, Tim texts Melissa to ask her to be his plus-one. He’s thrilled when she says yes – but horrified when Missy turns up on the flight. He’s been texting the wrong Melissa! Now his career hangs on a weekend in Hawaii with the flighty – and possibly unhinged – Missy.

The Wrong Missy devolves into a series of cringe-worthy set pieces. Some of these work better than others; but overall the humour is pretty sophomoric. Director Tyler Spindel doesn’t add much to the mix. His prosaic direction keeps things moving but does little to elevate the material.

Lapkus doesn’t get much support from the remainder of the cast, though Nick Swardson at least provokes a few laughs as an intrusive tech dude. Sandler regular Rob Schneider also pops up as a loopy charter boat operator.

The Wrong Missy is not a great movie. I suspect it would have gone straight-to-streaming even if Sandler hadn’t made his move to Netflix. But for all its many flaws, it’s worth watching just for Lapkus’ amazing performance.

The Wrong Missy is now streaming on Netflix