It is suspected that viewers of The Witcher will fall into two camps – fantasy readers/gamers, and Henry Cavill fans.  You’re in for a sizeable treat if you happen to be both of these things.  Sure, last Friday night you may have been one of those people who trudged off to see the latest Star Wars, feeling that was the thing to do, but the rest of us hit the couch, grabbed the cats and wielded the remotes like the small screen pros we are.  We’ve been waiting for this one ever since we first saw the promotional photos of British actor Henry Cavill sporting a silver blonde wig.  Sold! 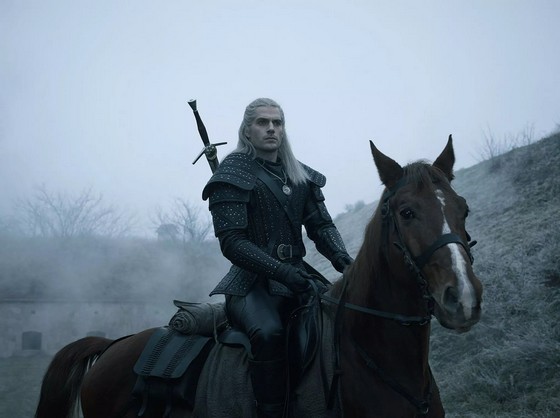 The Witcher is based on a series of dark fantasy novels written by polish author Andrzej Sapkowski. Season one (season two of the TV series has been confirmed) has been put together from three short stories that preceded the main Witcher saga and sets the stage for the eventual meeting of its three main characters.

Geralt of Rivia (Cavill) is sometimes welcomed, sometimes not, as he travels around the country accepting payments from villagers to hunt and kill the monsters that prey upon them. With only his horse and swords for company, Geralt has little to say but when he does speak he is worth listening to.  Feared for his savagery and abilities in detecting and killing the supernatural, Geralt is not always in agreement with the villagers as to who the monsters really are.

Yennefer of Vengerberg (Anya Chalotra) is venturing out into the world after paying a sizeable price to correct the physical differences that being born a quarter elf gave her.  Sold by her father into the tutelage of a sorceress, Yennefer is tested and found able to serve as a member of the Brotherhood of Sorcerers.

Captured after the sacking of her grandmother’s castle, Princess Cirilla (Freya Allan) knows she must find Geralt of Rivia as this was her Queen’s dying instruction. Using her emerging powers to escape her captors, Cirilla finds company on the road and learns that few had love for the murdered Queen and her court.

The Witcher is bingeable television that delivers spectacularly well in that one inclusion that any gamer or action fan simply must see –  jaw dropping and extremely violent fight scenes.  We are all here for that.  Kindly, some of these scenes are slowed right down so you can appreciate the flowing cloaks, the swords cleaving majestically through the air, oodles of glistening entrails and the gore dipped claws of monsters as they poke holes through whichever poor soul they have it in for.

Olympic level brooding would appear to be a fairly sizeable character trait of Geralt of Rivia.  Looking sensational in black and muttering most of his lines in an octave somewhere just above bottom of the garden, Cavill is also surprisingly adept at pulling all this ridiculousness off.  This production of course needed those mile wide shoulders and a commanding presence for Geralt to be convincing. Don’t be too critical of The Witcher – no, it is not the next GOT though it shares some of the dark humour and hammy acting that we all (continue to) love in The Last Kingdom, if we may compare.

The Witcher an easy binge and don’t worry about pausing when you pop off to put the kettle on or to go and feed Fluffy as most of the scenes without the magnetic Cavill in them are a bit of a yawn.  There’s some truly adolescent stuff in The Witcher that is standard fare for medieval fantasy dramas (think naked maidens, bards, prophecies, secret societies of grumpy mages, cursed princesses).  Just go with it and try and keep a loose grasp on the sliding timelines as our gravel voiced hero has much to experience before his purpose becomes clear.

Season one of The Witcher is streaming in its full glorious gorey eight episode entirety now on Netflix.  If you want to see a bit of a return to swords and sorcery with your fantasy viewing, you’ll love The Witcher.