The old saying goes that behind every great man stands a great woman. But what if the woman is doing a lot more than just “standing” there? What does a “supporter” deliver to a celebrity? And what should that “supporter” expect in return? Swedish director Björn Runge explores these questions in his thoughtful drama, The Wife.

Although set in the rarefied atmosphere of high literature, and featuring older people in a conventional relationship, The Wife is very much part of the current conversation. With a lot of play being given to the role of women, this film delves into how past attitudes to gender roles affect the present. 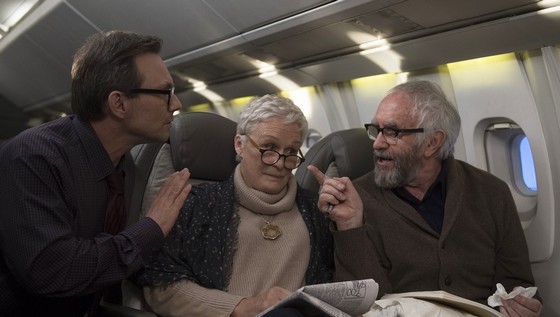 It also happens to coincide with a current crisis within the Nobel Academy around sexual assault allegations. The Literature prize won’t even be awarded in 2018 because the crisis is so profound. It’s been postponed to 2019.

The “wife” of the title is Joan Castleman (Glenn Close). She’s married to acclaimed novelist Joe Castleman (Jonathan Pryce). It’s 1992 and the couple has just received news that Jonathan has been awarded the Nobel Prize in Literature. Together with their adult son David (Max Irons) – himself an aspiring writer – the Castlemans travel to Stockholm for the awards ceremony. However, Nathaniel Bone (Christian Slater) dogs their every step. Bone, also an author, pesters Joe for his permission to write an authorised biography. Joe however flatly refuses. Once in Stockholm however, the veneer Joan and Joe have cultivated over the years begins to crack. Between the needy David, the forgetful Joe and the persistent Bone, Joan’s resilience is sorely tested.

Runge works from a script by Jane Anderson (Olive Kitteridge). She in turn adapts Meg Wolitzer’s novel of the same title from 2003. Despite the fact both Anderson and Wolitzer are American, The Wife feels very Swedish. I suppose, without actually knowing, that Runge as a Swedish filmmaker is imbued in the cinema of Ingmar Bergman. Certainly, the master’s shadow seems to fall across this production. At times, it almost feels like “Scenes from a Literary Marriage”.

You might also wonder if the film is trying to say something about actual 1992 Nobel Laureate, Derek Walcott.

The director also keeps things quite understated. Apart from a couple of scenes, much of the drama is subdued. This requires the actors to do a lot of the “heavy lifting” in conveying simmering but constrained emotions. And the actors deliver.

Glenn Close leads the way as the apparently doting wife. She gets a lot to work with in Joan, and finds the layers in the character. She’s almost certainly going to be in the mix for the upcoming awards season. Jonathan Pryce provides a foil for close as the exasperating Joe. Max Irons however isn’t as well served by the script, his character David coming across as rather one-note. Christian Slater adds colour as the duplicitous Bone.

The film looks great (even though Glasgow stood in for Stockholm in a number of scenes) thanks to Ulf Brantås’ crisp cinematography and Mark Leese’s exacting production design.

The Wife offers a rich, if demanding, cinema experience. It provides plenty of food for thought, along with large doses of raw emotion. It’s not easy going, but the best films often aren’t.