Second novels are tricky beasts loaded with expectations, particularly when they come on the heels of recent stellar debuts.  Australian author Christian White has written another confidently executed work of family drama and generational intrigue that will take up a just a few hours of your life, likely spent dedicated to polishing The Wife and The Widow off in one go. 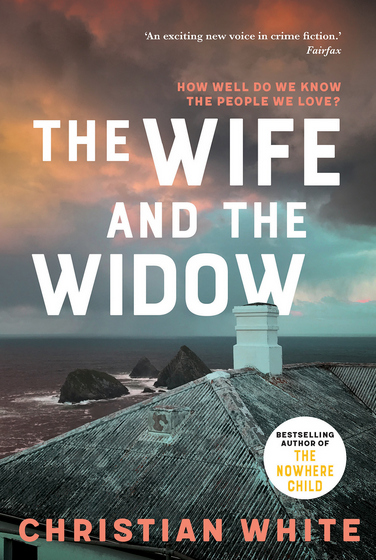 Deciding to surprise her husband as he disembarks from a London flight, Kate is alarmed when her husband does not appear with all the other passengers.  He is not answering calls, his employer has no clue where he is. Receiving a call that their island holiday house has had a trip on the alarm, Kate accompanies her father-in-law to investigate and hopefully retrieve her doctor husband who may have been experiencing some kind of mental crisis.  Kate instead finds evidence that her husband never left the country at all and that she is now to face life as widow.

Abby’s husband has been acting a bit strange lately. Abby at first believes this is likely due to their shared financial stress. Abby and Ray have two kids to support and work generally dries up in the off season of Belport, an island community that swells during the warmer months and shrinks once the tourists return to their mainland homes.   Abby hasn’t been scoring a lot of shifts either at the local supermarket on top of the downturn for her husband’s maintenance busisness, so things are a bit tough.

The discovery of a body in a submerged car off the Belport boat ramp has the whole community buzzing with excitement. Abby’s suspicions are raised when she discovers that her loyal and stalwart husband Ray has been feeding her lies about his daily activities.

It is hard not to mentally picture The Wife and the Widow as being placed in the U.S.  It is a very American read in style, so you will need to perhaps practice a little mental reset as you progress through.  Or don’t bother doing the mental rearranging at all, it might work better if you just accept that the novel is very light on for Australian references.

A good mystery novel progresses the reader through with many options as to where suspicions might feasibly rest, and next presents all the reasons why you should discard such thoughts immediately and move on to other possibilities.  One thing The Wife and the Widow absolutely nails is linkage.  Another is the creation of complex and relatable characters that make the best of a bad situation, even when that means letting go of principles and moralities that once may have defined them. The need to protect what is theirs may alter them forever.

There isn’t one single huge bait and hook offered to lure you into reading The Wife and The Widow. Instead there is one HUGE plot twist that is not revealed until well into the last third of the book, necessitating the need to completely realign yourself with what you thought was information gathering up to this point. Once confirmed, it is of course obvious to all attentive and savvy readers that we could see the twist coming all along. Actually, no… but you will see how assuredly this intricately plotted novel led us up the garden path away from the real prize.   The Wife and the Widow is a hugely enjoyable and immersive read that confirms White’s place in Australia’s stable of fine crime writers.

The Wife and the Widow is the second novel for Australian writer Christian White who has also written for film.  White’s debut novel, The Nowhere Child, was a bestseller and longlisted for the 2019 Ned Kelly Award for Best First Crime Fiction.

The Wife and the Widow is published by Affirm Publishing.