If you are still with The Walking Dead after ten seasons, it may be fair to presume that you are a diehard fan and have watched every single episode. Perhaps you were not there quite from the absolute beginning, but at some point you got on the bandwagon that was AMC’s The Walking Dead and you caught up with Sherriff Rick Grimes and his ragtag collection of fellow survivors. Maybe you too decided to give the show a long rest at some point, such as between seasons nine and ten.  It all seemed a bit pointless once both of the Grimes men were gone. 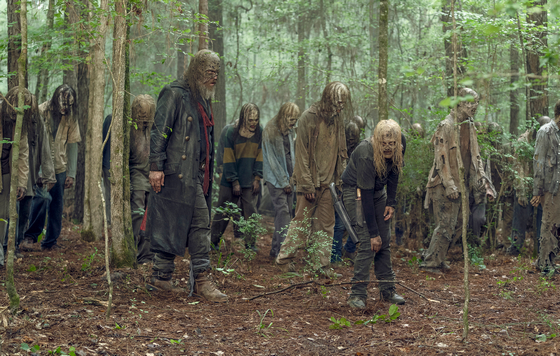 Our not-so-merry bunch of now hardened walker dodgers in Season Ten have been based at Hilltop, The Kingdom, Oceanside and at Alexandria since the fall of Negan and the Saviors. Negan remains in custody at Alexandria, under the watchful eye of Michonne and the other members of the Council. Still caged for the most, and still making everyone around him uneasy, six years later.

The skin freaks, aka The Whisperers, are a group of survivors who have taken the whole ‘wearing the meatsuit of your enemy’ thing a little too far. Donning the dehydrated scalps and faces of those walkers they have killed, hunting and skinning is a constant occupation for the Whisperers and their creepy bald leader, Alpha, is a dab hand at corralling the dead to stumble around in the directions of her choosing.  Losing a daughter to the survivor communities is not something Alpha feels she can let go, and it is with this in mind that treaties and borders between the Whisperers and everyone else must be respected. Unless you are Carol, then all bets are off.

The things with The Whisperers is that all the pitching and leaning and wearing gross skin masks – is just ridiculous. Even Negan talking to his barbed wire covered baseball bat and calling it after his dead wife made more sense. Why make things more horrible for yourself in the apocalypse than you have to?  Sam Morton as Alpha does her best with the weirdly disjointed hippy lines she’s given to deliver cartoon style whilst she google eyes her baby blues at whatever character she’s speaking to – but it’s not enough.  Go on right ahead and fast forward the scenes with the Whisperers as you won’t miss much and it might stop you bailing on the show altogether if you reduce your exposure to them.  The exception is if Negan (Jeffery Dean Morgan) is on screen though, as Negan continues to be the only (darkly) funny character in the show and is still getting all the best lines e.g. “hold your tits there jelly bean giant!”.  (Trust me, you had to be there).

The Walking Dead still features a huge ensemble cast and fortunately has managed to retain two of its most compelling original characters, the often shipped Darryl and Carol. Both actors have needed to step up this season and the greater screen time of both actors has all been to the good.

With so much scope in the universe of The Walking Dead it was easy to see why the spin off series (Fear the Walking Dead, a much drier beast) was so successful.  Another production or three are also in the pipeline featuring showrunner Andrew Lincoln, expected to detail exactly what happened after his character Rick Grimes was inexplicably choppered up, injured, away from his people and out of Virginia.

Season ten of The Walking Dead needed to put a lot of work into re-engaging its fan base who were finding it a bit hard to accept TWD universe without either Rick or his gentle son Carl. The relationship dynamics between survivors, whether that’s romantic or homicidal, are explored in greater detail nd some of the pairings will make you raise your eyebrows at how standards and expectations have dropped in the apocalypse.

As always, expect some more losses that are going to come out of nowhere, and some that are so obvious in their lead up that you won’t be surprised in the slightest when they happen. We’re all a bit immune to the blood and gore now so it’s a harder job for the writers to shock their seasoned audience.  The Walking Dead is still one of the best shows out there, but the challenges the characters face are on repeat each season.  Halfway through, you will have your ‘holy cow’ moment, I promise, and as to who delivers that moment, might yet surprise you.