The Two Popes gives us the behind the scenes story of how one Pope stood aside for another in a move not seen for more than 700 years. The pair – Pope Benedict (Anthony Hopkins) and Cardinal Bergoglio (Jonathan Pryce) – didn’t see eye to eye on several issues and yet had mutual respect. One was a traditionalist and the other a reformer. One wanted the job. The other didn’t. 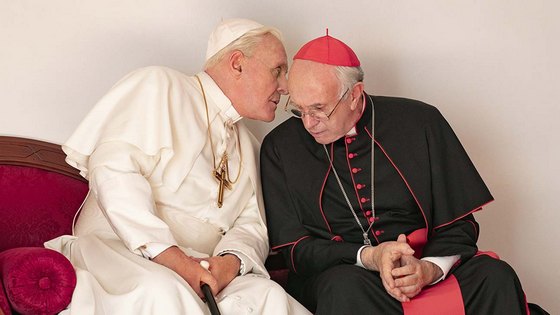 One was charismatic and popular, the other not so much. Both hid dark secrets that are revealed in the movie, which has several comedic as well as dramatic moments.

In the case of the new Pontiff – that is Argentine Cardinal Bergoglio who would become Pope Francis in 2013 – much is revealed in flashback. That includes how – at the last minute – he turned his back on an Earthly physical relationship to become a Jesuit priest and how he betrayed his fellow brethren in their hour of most need. For the former, his deadliest sin appears to have been turning a blind eye to the clergy’s sexual improprieties.

All unfolds as Cardinal Bergoglio makes a beeline to Vatican City to resign from his exalted position in the church. Over several days he tries to get the Pope to sign the necessary paperwork, while the Pontiff is about to drop a bombshell of which the Cardinal has no idea. Through a series of conversations, it becomes clear to the incumbent that he has found his successor.

Intermingled with two fine actors playing the lead roles is news footage of the times, making what we see seem ever more real – fly on the wall stuff, if you like.  Jonathan Pryce, in one of the roles of his life, imbues Cardinal Bergoglio with a humility that gives much credence to his character’s position. Anthony Hopkins, too, makes his presence felt, as is his want. In this case, he is a Catholic spiritual leader set in his ways.

The Two Popes is a fascinating and intriguing, if overly extended, look at recent history, which – I recall from the time – shocked many in the establishment. I am, of course, talking of a Pope resigning.

The Two Popes streams on Netflix from December 20th after a limited cinematic release.