Netflix has a whole host of films with interesting premises and solid performers that well suit the streaming platforms rather than the big screen. The Titan is one of these.  Perfectly entertaining for a cold night in, but you’d be a bit peeved if you’d ponied up to watch this low key film at the cinemas. The expense and scope of a full budget cinematic release isn’t there, but The Titan is still worth your time. 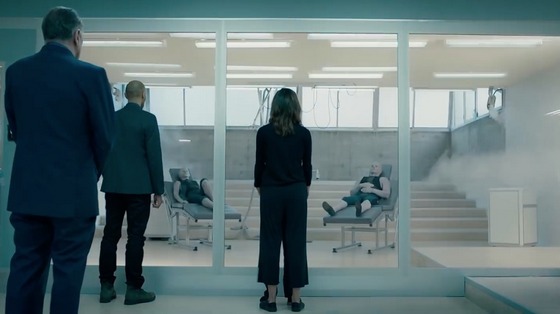 It is the year 2048 and Planet Earth needs to sort out Plan B. Rick Janssen (Sam Worthington) and his wife Abigail (Taylor Schilling, star of ‘Orange is the New Black’) are steadfast in the belief that science is the answer to the survival of humanity. Recruited to participate in a government run program which aims to adapt exceptional humans to living off planet, Rick and his fellow human guinea pigs have all proven in the past to have something a little extra in their genetic makeup or disposition.

With the aim of creating super humans able to live and thrive on the surface of Titan, one of Saturn’s moons known to have a dense atmosphere, the program is ruthless at assessing and discarding its candidates. Abigail is a scientist, and the first to question the program’s medical team if she feels that the treatment of her husband isn’t quite what it should be. The changes in Rick are initially subtle. Abigail feels at first well informed about the effects of all the drugs and tests necessary to fundamentally change the physiology of an Earth dwelling human to become one capable of surviving in the icy environment of Titan.

As the other participants in the program begin to exhibit aggression and other concerning changes, Abigail becomes concerned about what Rick is truly experiencing and decides to investigate the facility.  Increasingly worrying decisions being made by the Program Director (Tom Wilkinson) are at the forefront of her mind.  The extent to which Rick becomes ‘other’ puts Abigail’s commitment to the program, and to the safety of her family, to the ultimate test.

We’ve seen the agreeably placid face of Sam Worthington become an alien in the past thanks to Avatar and so we do so again in The Titan.  More frightening this time around though with less of the happy smurf skin.  The scenes of Rick’s transformation are the highlight of the film, though with Worthington being that heavily rubberized, we were up to receive even less human expression that we witnessed when the character of Rick was fully human.

With plotholes wide enough to drive a truck through, The Titan is not one for the viewer to get caught up on the specifics of.  We are never quite sure what has happened to dear old Earth, with the events placed in a NATO base somewhere out in the desert. The bulk of the scenes are shot at the medical facility (which looks like an old abattoir or recreation centre that was handily re-purposed) and in a swanky smart home community established for the program’s participants and their families.  So we don’t get to see much more than this.

The concept of The Titan was a great idea, not fully explored, which could have made a terrific feature film with a bigger budget better able to explore more of what this future compromise would look like.  The CGI isn’t terrible, as we do get to see the phantasmic satellite that is Titan. The acting is not awful either, and a lot of the initially flaming of this film was probably underserved. We were just expecting a lot more science fiction conundrums present to drive the plot that what we encounter here. Remember how disappointed you were when Jodie Foster’s character ripped through her created wormhole and had a chat with her dead father on a vividly coloured beach in The Arrival?  Nowhere near that level of disappointment, and The Arrival was a terrific science fiction flick.

The Titan includes an unexpectedly poignant relationship quandry that the two leads must negotiate, and its one that you’d imagine would become extremely relevant to our future selves. For this alone, I will remember this film fondly (but not as fondly I suspect as my teenage lockdown movie buddy, who sighed over the romanticism of it).

The Titan is able to be viewed now on Netflix.