There are still certainties in this world. First of all, you can expect that if a type of movie has enormous success, something similar will appear in no time. A matter of surfing on the wave of success, I guess. The Silence resembles, for instance, the successful film A Quiet Place. It’s not exactly the same thing, but there are a huge number of similarities (and yes I know both films were made almost simultaneously and it’s based on a novel from 2015 – but still!). And then it appears once again that humans are the cause of problems. So this time no space monsters with a sophisticated hearing organ, like in A Quiet Place. Now there are some over-enthusiastic speleologists who can’t resist sticking their noses into something out of curiosity. In particular, a cave that they have discovered. Cries of joy are quickly replaced by cries of fear and hysterical whining, the moment they break through the cave wall. What these human moles didn’t realize was that they were about to release some prehistoric bat-like creatures into the world. Beings who, after years of living in the dark, only rely on their hearing so they can find another victim. Best advice? Be silent. 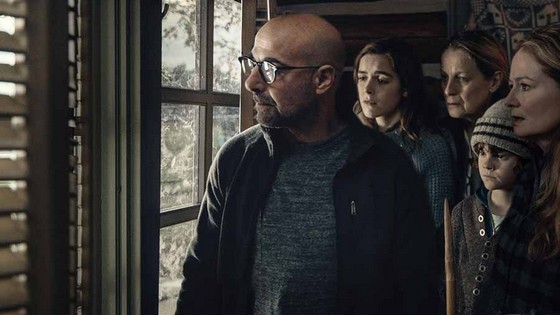 The biggest difference with A Quiet Place is the unveiling of the bloodthirsty flying monsters. In A Quiet Place it took a while. In The Silence you don’t have to wait that long before you see the little monsters at work. Yet there are several similarities to be discovered. So the word plagiarism is very quickly dangling off the tip of your tongue. Again it’s about a family with two children with daughter Ally (Kiernan Shipka) also having a hearing problem. Although not congenital but because of a terrible accident in which her grandparents also perish. Here too there are certain confounding factors among the family members that could put others life at risk. In A Quiet Place it was a newborn baby whose crying was a lure for the terrible creatures. Here it’s grandmother Lynn (Kate Trotter) with an annoying cough and the dog Otis who barks all the time. And just like in Bird Box there’s a safe haven where everyone is heading for.

The Silence clearly has similarities with a whole bunch of other movies. The disadvantage is that you have an early feeling of haven’t-we-seen-this-already-before. Even though it is all a bit more action-packed and at certain moments more exciting. On the other hand, it’s true that not showing the imminent danger immediately (such as in A Quiet Place) ensures that you’ll be waiting with bated breath for that revelation. The biggest difference lies in the religious aspect that’s incorporated in the story. The Apocalypse breaks out and before you know it there’s some ingenious person who immediately starts a cult.

As with any religion, this self-proclaimed religious leader also introduces a dogma that makes it impossible to jeopardize the cult through unexpected, loud noises. The dogma involves a radical intervention on the followers. It is hoped that none of them will get stomach flu, with noisy flatulence as a result. Or that one of the short-sighted followers is a bit too obese, which makes that moving around is quite noisy. Away tactical advantage, I would say. In short, another proof that religion cannot be associated with logical reasoning. On the other hand, they were interested in the fertility of the young girl. Well, that says a lot.

And unfortunately, the film is full of such pathetic ridiculous things. Actually, it was already stupid of them to ride off in a noisy car. And of course, they flee, even though the authorities advised to stay indoors. And wasn’t there anyone smart enough to simply keep the wood chipper running constantly? Maybe an annoying, maddening noise. But anything’s better than being eaten by bat-like flying dinosaurs. With united forces, they could easily have destroyed the colony of animals in one fell swoop. Or were there really so many of these creatures? And nobody here who thinks to throw an object to mislead these bastards. Nope. They do things the hard way and start waving around with a mop.

Fortunately, the acting performances weren’t of a lousy level. It’s always a pleasure to see Stanley Tucci at work. Although I thought his persona was more interesting in Patient Zero. Unfortunately, that movie wasn’t very good. Apparently, there’s also a lot of criticism from the deaf community about the non-deaf Kiernan Shipka playing the role of Ally. According to them, it’s impossible for her to understand what it feels like to be deaf and also that her sign language wasn’t flawless. Could be. But I don’t agree with regard to empathising with her character. Couldn’t a talented actress or actor empathise to such an extent that it comes across as convincing? I assume that Denzel Washington and Nicolas Cage don’t have a drinking problem. And yet their interpretations as alcoholics in Flight and Leaving Las Vegas were damn realistic enough for me. And I am able to objectively assess that, believe me. And finally admiration for Kyle Breitkopf as the younger brother Jude.

All in all, this film is the weakest one from the Netflix Originals stable. As a horror, it’s a total failure. It’s never really scary or exciting. The tension is removed by portraying the scary animals very early in the film. This type of film involves more than just portraying a lot of hysterically screaming people (which in turn has bad consequences for them). No, there are certainly better alternatives to view. And if you don’t know which one I mean, I recommend a reread.

You can watch The Silence on Netflix now!