Assigning human characteristics to animals invariably makes for cute viewing and that’s the case in the The Secret Life of Pets 2. This film follows the success of the original (2016) in which terrier

Max (the voice of Patton Oswalt) had to learn to share his owner, Katie (Ellie Kemper) with a new dog, a stray named Duke (Eric Stonestreet). 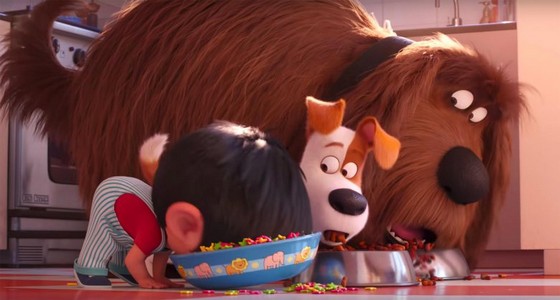 This sequel kicks off with Max insisting his life is better without a child in the house. But that’s before Katie has an accidental meeting with a guy. They fall in love and have a baby, Liam (Henry Lynch) – and everything changes. In next to no time Max has changed his tune about a little one in his life, even if he still dismisses other kids.

The story arc centres around Max and a number of other pets in a New York apartment building. Snowball (Kevin Hart) is a bunny whose owner dresses as a superhero; but he thinks he’s the real thing. Fearless feline Chloe (Lake Bell) is intent on rescuing a cruelly treated circus tiger guarded by a pack of hungry wolves. When Max and Duke go on a farm visit, they meet aloof canine, Rooster (Harrison Ford), who keeps the other animals at the farm in check. Max grows as a result of the experience.

At times the switches between storylines was jarring, although not surprisingly it all came together in the end.

The Secret Life of Pets 2 is a combination of cute, clever and silly. Some of the sight gags and one-liners work better than others. There’s plenty of movement and colour.

One of the directors from original – Chris Renault – returns for this sequel, this time with co-director Jonathan del Val. Brian Lynch, one of three writers from the original, provides the script.

While the feature doesn’t set the world on fire, I dare say there’s enough here for youngsters aged eight and above.