Calling into a streetside deli on the way home from his hospital shift, Doctor Harrison Brennan becomes an innocent victim in yet another convenience store hold up.  Shot by responding Chicago police as he attempts to help the cashier with his injuries, Brennan leaves behind a husband and an adopted seventeen year old daughter.  The Red Line only gives us a short introduction to the character Dr Brennan, but it’s one you need to keep close in order to grasp the enormity of the aftermath. 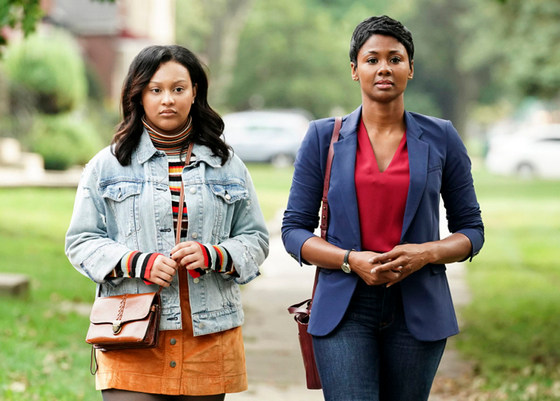 Six months out from the shooting, high school teacher Daniel Calder (Noah Wyle) is struggling to keep it all together in front of daughter Jira (Aliyah Royale). When the federal charges against the police officer who shot Harrison are dropped, Calder experiences a shift in perspective and takes the advice of friends to file a civil suit against the city.  The need to receive an apology from the white officer, Patrolman Paul Evans who shot an unarmed black man begins to take a toll on Calder, who cannot understand why daughter Jira now has such a strong need to seek out her biological mother.  Everyone has an opinion on what the two should do next, and navigating through the legalities and expectations is an onerous task for two people already struggling.

The intention behind The Red Line would seem to be to pack in as many social issues as possible into its plot and seeing where they land.  The Red Line can feel crowded at times, but the acting chops of Wyle serve well to lift the drama up to a level where the audience can relate to at least some of what his character is experiencing.  Let’s not forget that Wyle racked up a whole swag of Emmy nominations during his eleven years working on E.R. (and won a few Screen Actors Guild awards also) so it has always been the small screen where he has been known to shine. It’s a treat for the Gen X TV addict to see Noah Wyle again on the small screen in another tissue worth drama and The Red Line will give you plenty of cause to mop at your eyes with some truly gorgeous little pearls of dialogue scattered throughout.  The soundtrack is rather lovely also and The Red Line cozies up at every opportunity, pairing each character off with someone who can support or guide them through their next moves.

The themes of grief and determining what is your own cultural identity are strong throughout The Red Line with this being supported by the choice of title for the show. The Chicago Red Line train service is at the centre of the production, with the show’s characters living and working within its defines.  The Red Line takes care to illustrate what a melting pot the area is, with various characters mentioning where it is that they live, and where they used to live before coming to the area.  The reactions of its people to the shooting of a black officer are illustrated through the perspectives of the police community, politicians, its teachers and its children.

There aren’t any winners as such in The Red Line, and the redemptive arcs are rather clumsily inserted but there’s much to be experienced from watching one little family come out of the mire and adapt after their lives have been so suddenly and painfully altered by senseless loss.

The Red Line is an 8 part series with all episodes currently streaming on SBS on Demand.