The new season of The Purge has discarded the ‘endless night’ approach of season one and instead dips into the murk that is the aftermath of the Purge night events.  It’s now all about dealing with what you did, what you may have seen and what you may have experienced during the twelve hours of violence and general mayhem that is the Purge.  Also, let’s not forget about forward planning! What acts of violence and horror might be held over for the next Purge night holiday? 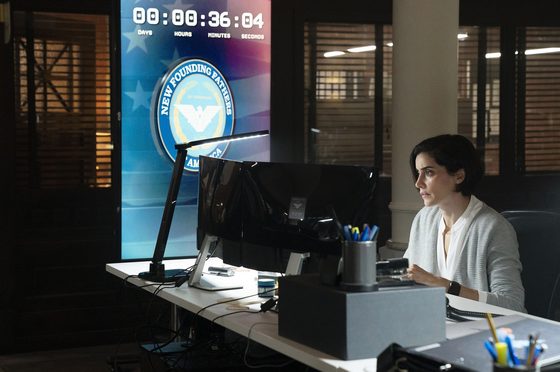 No clue what The Purge is?  A simple concept, and a lot easier to accept in the present day than it may otherwise have been when the original Purge movie came out, way back in the more innocent days of 2013.  The Purge is a national holiday, when every American has the right to ‘purge’ their anger over whatever has royally bugged them in the last year.  Americans may exercise their right to commit acts that on any other day of the year would be deemed heinous crimes – robbery, murder, torture etc – secure in the knowledge that they will not be arrested for any of these acts.  There will be no emergency services to call upon during the Purge – no paramedics, no police.  America is either in lockdown or running wild in the streets.

Come siren’s end to the Purge, if you are caught committing any criminal act, you will be prosecuted.  It’s all a matter of seconds if your acts are now deemed to have been on the clock and thus punishable offenses.  Leave your violent acts to the last minute at your peril.

The 364 days between subsequent Purges are explored through the viewpoints of several groups of characters that we are first introduced to in the final moments of the Purge.  (Note – these are not follow on episodes from the first season).

Two bored frat brothers decide it’s a fine time to go out and take some classic Purge photos such as bodies swinging at a nearby hanging spot. One college student is caught by someone just that little bit smarter who is actively participating in the Purge via a spot of capture, torture and kill.  The next day meet up between Purge night survivor and Purge night deserter proves to be a little awkward.

The NFFA (The New Founding Fathers of America), whom we were introduced to in Season One, continue to be a presence in this new order of governance and monitoring that is the United State of America. With security cameras monitoring the hot spots of the Purge, one hot shot tagger/security advisor has her attention snagged by vision of someone known to her, trapped outside during the Purge.  Whilst its not professional to take a personal interest in purge night, Esme (played by Paola Nuñez) can’t help but want to find out more.

Dr Markus Moore (Derek Luke) is targeted for purging by persons unknown and barely escapes the directed attack.  Attending the carnage that is his hospital emergency ward the next day, Moore spots someone who can help answer the question of who ordered the hit.

During the NFFA scenes, it becomes a little reminiscent of the CTU scenes from 24, complete with wobbly camera angles that seem to be shot from the perspective of someone peering out over the edge of a desk.  Agency intervention being just as unwanted as a hockey masked murderer, these scenes give us a more involved view of the true powers that rule this alternate present or near future.

This fresh look at the maelstrom of blood and violence that is the Purge is a slicker production than its predecessor, which did become like a grim march to the finish line by mid season.  The Purge season two has a better populated set and the cast don’t seem quite as embarrassed by their lines as the actors in season one often appeared to be.  Taking a more clinical view of the Purge plotwise post kick off, with the scenes of a professional crew of Purge robbers included, pays off with several subplots exploring what might come in between these periods of time where ordinary Americans let loose on their inner crazy.

The Purge season two is now dropping an episode a week on Amazon Prime.