Sometimes you are awed by cinema films because of the immensely beautiful special effects and the use of unparalleled images. The other time it’s the inventiveness of a story and the way it’s structured. And in other films, you look with admiration at the way certain actors play their role. Is it obligatory that a movie looks phenomenal to you? Or does it happen sometimes that while reading a novel, in which the sophisticated juggling with words creates literary excitement, you have difficulties to keep your eyes open and your head nods back after a short period after which a little snoring is heard?

Well, in that case, it might be better for you to ignore this film. Because in The Professor and the Madman there are no breathtaking special effects to be found and the emphasis is on the literature from this world. For me, this was a masterful and fascinating story about how the world-famous Oxford English Dictionary was put together. 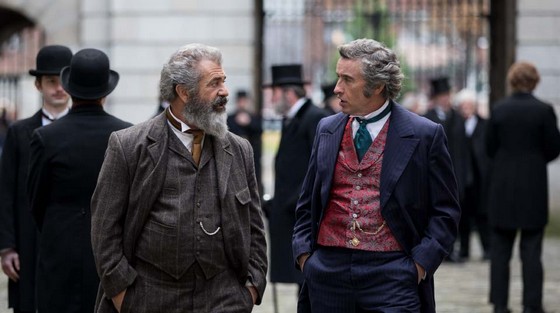 Even though this takes place around 1850, there are certain facts that can be found in our contemporary society. And, of course, there are also substantial differences. The film is not just about the realization of an almost impossible assignment with limited resources. It’s also about the existence of class differences, scientific ignorance and the application of inhumane practices in psychiatric institutions. It demonstrates the pretentious behavior of the wealthy class and the political juggling in intellectual circles. And in between these topics, there’s the Scotsman James Murray (Mel Gibson) who, with the help of countless strips of paper, miles of knitting yarn and with a ton of patience, tries to contain and interpret every existing English word in literary history. An assignment that requires immense efforts to the detriment of his wife and children.

I’m aware that literature (at least for me) isn’t exactly a sexy subject. I already assumed that this film wouldn’t be intense or exciting. But just like with Kill Your Darlings, this historical drama fascinated me. And this because of the challenge Murray took on. I looked in disbelief at the method that was applied. And I was constantly wondering if this was achievable. It’s an era where people didn’t know the word digital yet (one word they don’t need to concentrate on) and they didn’t have computers at their disposal. No indexed work file with linked cross-reference tables on which one could release SQL statements, to do big data analyses.

No, everything was scribbled down with old-fashioned ink pens on sheets of paper and then attached to the walls. Can it be more primitive? It’s wonderful to see that James Murray actually applies the principle of content management here by encouraging the English people to write down English words and send them to them by mail (indeed no e-mail).

It’s mainly the brilliant acting of Mel Gibson and Sean Penn that makes the film more interesting. Gibson plays the Scottish academic and autodidact who, despite the opposition of the established values from the Oxford Board of Directors, is appointed as the driving force behind this renowned work and is a model of perseverance. My favorite scene is where he’s introduced to these intellectual snobs who don’t even bother to hide their aversion. The moment Murray lists all the languages he knows and I saw those bewildered faces of the narcissistic academics, it immediately reminded me of the scene in a student bar with Matt Damon in “Good Will Hunting“. There, too, such a rich man’s son with a snobbish attitude was put in his place in a brilliant way.

Mel Gibson’s sparring partner is William Chester Minor (Sean Penn), an American army-doctor and war veteran who is haunted by delusions. In a phase of extreme madness and schizophrenia, he kills an innocent passer-by and ends up in the Broadmoor Criminal Lunatic Asylum. In short, an institution for criminal madmen. The doctor on duty there, Dr. Richard Brayn (Stephen Dillane), initially envisages a decent treatment (which leads to certain privileges such as a large room with a gigantic library). But towards the end, he eventually seems to be a supporter of terrible techniques anyway.

It’s thanks to a book that Minor received from his victim’s widow (in my eyes, the weakest aspect in this film) that he finds out that Murray asked the English people for help. And that’s the impetus for Minor to get to work and to overload Murray with thousands of words for the dictionary. The way Penn plays this tormented and insane man is simply formidable. And yes, this tends to look like overacting. But isn’t it necessary to portray this type of individual? Minor is after all nuts.

There are several facets that are beautifully worked out. Such as the detailed decor in which the story takes place. London during the 19th century with its typical costumes, way people behave and attributes. But above all, the interaction between the two extremely brilliant gentlemen is perfectly portrayed. Two tortured intellectuals. The one because of the obstructions and impossibility of the assignment. The other because of the inner demons that make his life unbearable. An individual suffering from a post-traumatic stress disorder (PTSD). An unknown condition in those days. The dialogues in which the two gentlemen show their love for English vocabulary is sublime to watch. The way in which they both perk up while saying one word after the other with a smile is a feast for the eyes.

Perhaps the corny storyline about the widow Eliza Merrett (Natalie Dormer) didn’t really fit in with the whole and the emphatic message about regret and forgiveness was a bit over-the-top. But despite those shortcomings, I found this historic film based on true facts fascinating enough. So if you have questions about the origin of dictionaries, you shouldn’t miss this film. At the same time, you also have an idea about academic intellectualism (and their self-righteous and arrogant attitude) and the horror of 19th-century psychiatry.

But what I wondered the most: are Gibson’s and Penn’s beards the result of natural beard growth or props?