If you are into slapstick humour, you are going to have a ball with The Play That Goes Wrong. This riotous theatrical disaster is stumbling its way around Australia, starting in Melbourne. The premise is straightforward enough, but its execution something else entirely.

The Cornley Polytechnic Drama Society is attempting to stage a 1920s Agatha Christie-style murder mystery, titled Murder at Haversham Manor, but virtually everything that can go wrong does. Nevertheless, these accident-prone thespians are troopers and battle on against all the odds to get their final curtain call. 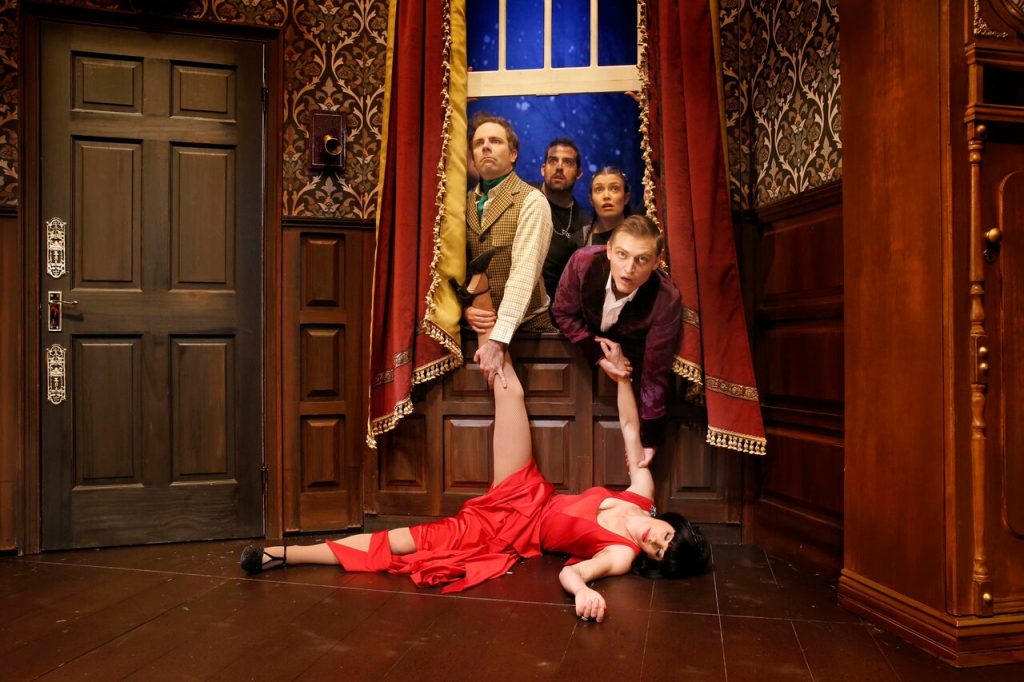 The play was written by Mischief Theatre members Henry Lewis, Jonathan Sayer and Henry Shields. It won the Laurence Olivier Award and the Moliere Award in Paris for Best New Comedy.  An extended extract from the production featured in the Royal Variety Performance in the UK.

Sight gags are the cornerstones of this play to end all plays, but there are also the one-liners, including those from the emcee in introducing the show and when he returns to do the same before the second act. While the contention around which events unfold is a whodunit (a man is discovered dead on the day of his engagement and his fiancé is having an affair with his brother, so immediately they and everyone in the stately home is a suspect), the outcome is virtually of no consequence. It is really just a lose excuse for everyone to act up, forget their lines and play silly buggers.

The Play That Goes Wrong is outrageous, laugh aloud funny and also very, very silly (yes, there is that word again) … and the actors keep on upping the ante. In short, before this is over, the whole world around them comes crashing down.  Clearly the performers – the best-known name among them is Brooke Satchwell – are out to have fun and so is the audience. Mock fights, being pummelled and colliding with hard objects are all part of the repertoire. I thought I was watching the cast from Fawlty Towers meeting up with The Three Stooges.

Tickling the funny bone doesn’t take any time as the mood is established even before the theatre piece starts. That is when the supposed sound technician and another stagehand call upon an unsuspecting audience member to lend a hand in readying the set. Then it is all deliberately downhill from there. Nothing wrong with that when such mirth and merriment are involved. The brisk pace, frenzied activity and harried actors never let up, so be prepared for a cacophony of laughter and a few gasps of incredulity.

The Play That Goes Wrong is playing at the Comedy Theatre in Melbourne, before moving to Her Majesty’s in Adelaide on March 28th, then onto Roslyn Packer Theatre in Sydney on April 5th. It goes to the Canberra Theatre on April 25th, then onto the QPAC Concert Hall in Brisbane on 4th May and finishes up in His Majesty’s Theatre in Perth from 31st May.