A ripping yarn and a grand adventure, The Personal History of David Copperfield delighted me. It highlights just how magnificent a writer Charles Dickens was. The movie (penned by Armando Iannucci and Simon Blackwell, with direction from the former) re-imagines Dickens’ classic ode to perseverance through a largely comedic lens. 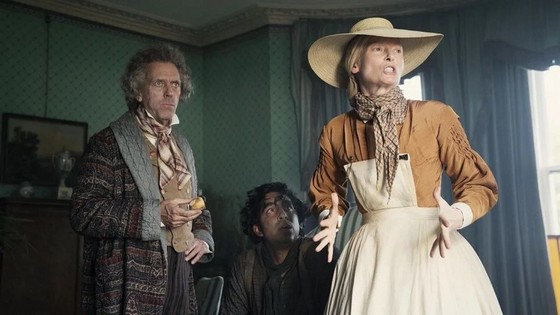 Copperfield (Dev Patel) narrates his life story. It opens in Victorian England. In the Rookery housing slums, a young widow Clara (Morfydd Clark) gives birth to David, with the help of well-meaning, but flummoxed housekeeper, Peggotty (Daisy May Cooper). Also in attendance is David’s eccentric aunt, Betsey Trotwood (Tilda Swinton), who was sure David was going to be a girl.

David’s early years are happy and peaceful as he spends time with Peggotty’s family in Yarmouth in their unusual home – an upturned boat on the beach. He lives out idyllic summers with Peggotty’s brother Daniel (Paul Whitehouse) and his adopted children, Ham (Anthony Walsh) and Emily (Aimée Kelly). But everything changes when David discovers  his mother has married Edward Murdstone (Darren Boyd), a cruel man with an equally fearsome sister, Jane (Gwendoline Christie). Many more highs and lows follow.

We see David banished to work at a bottling factory, before escaping to stay with his aunt and colourful distant cousin … and much more besides. It reads like tall-tales-but-true from the legendary past.  The diversity of adventures make this screenplay stand out, not to overlook Copperfield’s resilience.

Patel, and two other younger iterations of Copperfield, as portrayed by Jairaj Varsani and Ranveer Jaiswal, make for a charming main character. I also enjoyed the characterisations, foremost among them Tilda Swinton as the dotty aunt and Hugh Laurie as her colourful distant cousin Mr Dick.


The filmmakers have woven an exquisite fantasy, where I was constantly waiting for the next chapter. In other words, The Personal History of David Copperfield is the equivalent of a page-turner. I readily lost myself in the mayhem and madness. I found the two hours passed very quickly, which is a good sign I was enjoying myself.