The sophomore feature from Jennifer Kent (The Babadook), The Nightingale offers up horrors of a different kind. Set in Tasmania in 1825, the film is a bloody, brutal and unflinching tale of revenge that also addresses the savage history of colonial Australia, the systemic abuse and mistreatment of women and the indigenous population. It makes a powerful statement about a history bathed in blood. 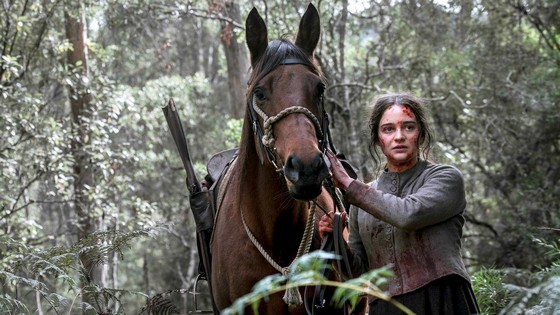 The central character here is Clara (Aisling Franciosi), a former convict waiting to gain her ticket of leave and become a free woman. But arrogant and ambitious and abusive Lieutenant Hawkins (Sam Claflin, cast against type) delays his decision so he can bed her. But her husband is killed by Hawkins and his crude sergeant Ruse (Damon Herriman), she is raped, and her baby murdered. Hawkins leaves and is making his way to his new posting in Launceston. Clara sets out for revenge. She engages the aid of a local tracker Billy (Baykali Ganambarr) to help guide her through the wilderness to exact her revenge. Billy himself is bitter and distrustful of the white folk because of his experiences – he was taken from his family and he has watched aboriginals being slaughtered and their land taken away.

The film has been shot on location in Tasmania’s rugged forest regions, and looks stunning thanks to the superb lensing of cinematographer Radek Ladczuk (The Babadook).

Franciosi (Game of Thrones) is good in a physically demanding role and she conveys Clara’s pain, anguish and physical distress. Claflin (Adrift) is suitably cold and nasty as the villain of the piece. In his first acting role, Ganambarr delivers a natural performance.

This is a hard-hitting drama, and the violence here is quite raw, bloody and graphic and disturbing. The tough rape sequence apparently caused a number of walkouts when the film screened at the Sydney Film Festival.

Although an important film, The Nightingale will not appeal widely mainly because of its handling of some controversial subject matter.