Although corny at times, the quintessentially Australian comedy The Merger is also endearing. 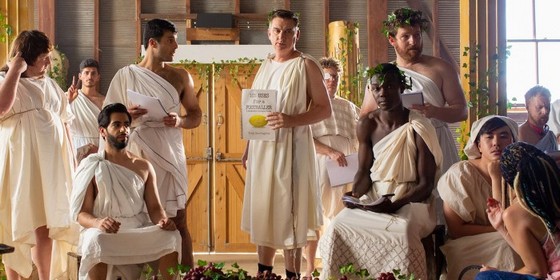 The township of Bodgy Creek has seen better days: the population is dwindling, jobs are scarce and litter has built up around the fading Tidy Town sign. The next victim of the town’s decline is set to be its cash-strapped Aussie Rules football club. Barely able to field a team, the club is reeling from news that its clubrooms have been condemned due to asbestos contamination. A left-field solution to their woes comes in the form of former star Troy Carrington (Damian Callinan).

Troy fell out with the community over his role in protests that led to the closure of the local timber mill. Now he lives a hermit-like existence on the town’s fringe. However, he strikes up an unlikely friendship with young Neil (Rafferty Grierson), who’s struggling with the recent loss of his father. Neil coaxes Troy into coaching the team. Neil’s mum Angie (Kate Mulvany) runs a nearby refugee support centre. Together they contrive to recruit refugees to save the team.

However, the plan isn’t well received by Neil’s grandad and club president Bull Barlow (John Howard), who leads a concerted protest to undermine the refugee plan. For all Troy’s good intentions, his initial efforts to turn this rabble into a team seems to be faltering. Aside from the brilliant Sayyid (Fayssal Bazzi), the team is going nowhere fast … until all that changes.

Damian Callinan wrote the film based on his stage play. It capitalises on Australia’s push for multiculturalism, taking a fish-out-of-water approach. Smart one-liners pepper the script – alongside a few turkeys. The outcome is transparent very early on, but it doesn’t matters because you’ll cheer on the hometown heroes regardless.

The Merger benefits from its small-town appeal and its embrace of a genuinely warm message. It goes from laugh-aloud comedy to tear-welling empathy. Much credit must go to the scriptwriter and star Callinan and to the disciplined direction of Mark Grentell.

Callinan is easy to watch as Troy, the understated catalyst for change. Mulvaney is full of heart and sass as Angie. Grierson plays Barlow’s precocious offspring to perfection – a young boy trying to chart his path forward without his father. Howard channels the old style of bull literally and figuratively in assuming the persona of Bull Barlow.  Bazzi is well cast as the refugee with a strong sense of self and an innate ability to handle a football.