Maverick filmmaker Terry Gilliam finally brings his long-gestating passion project about Don Quixote to the big screen. The struggles he faced have been well detailed in the fascinating 2002 documentary Lost In La Mancha. That film told of the storms that destroyed sets, the lack of financial support and the ill-health of its star, all of which combined to halt production within a week. Now, some twenty years later, we finally get to see Gilliam’s The Man Who Killed Don Quixote. And it’s a flawed, unwieldy beast liberally filled with the filmmaker’s signature stylistic touches and quirky sensibility. 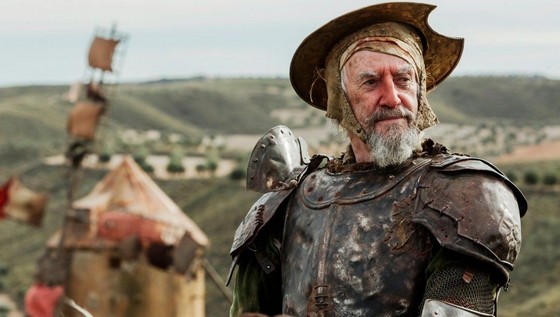 Co-written with Tony Grisoni (who collaborated on the equally bizarre Tideland), this is a shambolic mess with its chaotic structure and non-linear narrative. The Man Who Killed Don Quixote is very meta in style, with lots of references to the original concept that Gilliam began shooting in 2001. But it is also a trenchant critique of the filmmaking process itself as well as the producers and backers who like to play it safe. The film is heavily driven by inane slapstick sequences and lots of busy subplots, many of which end up going nowhere. Gilliam has recast the roles that were originally intended for Johnny Depp and the late Jean Rochefort.

Adam Driver steps into the role of Toby, the hapless central character. He’s a filmmaker who comes to Spain to shoot a Russian vodka commercial for his financiers. While in Spain he comes across an old student film he shot ten years earlier telling the story of the chivalrous knight errant Don Quixote. Toby cast Javier (Jonathan Pryce) in the role of the knight who tilted at windmills. Now Toby reconnects with Javier. But Javier has become delusional and really believes that he is Quixote. Javier mistakenly identifies Toby as his faithful but dim-witted servant Sancho Panza. And the pair reluctantly set out on a road trip across the countryside with plenty of comic misadventures. But the film goes off the rails by the third act. Gilliam throws just about everything at the screen in the hope some of it sticks in a frenzied, nonsensical approach.

Pryce and Driver create a wonderful odd-couple dynamic that drives the film. Driver brings a lugubrious quality to his performance and throws himself into the more physical elements of the performance. Pryce meanwhile is hilarious as the heroic dreamer and delusional warrior.

The musical Man of La Mancha remains firmly entrenched in the minds of many cinemagoers. This fanciful take on Cervantes’ legend of Don Quixote is unlikely to dislodge those memories. Ironically this is another example of Gilliam tilting at cinematic windmills.