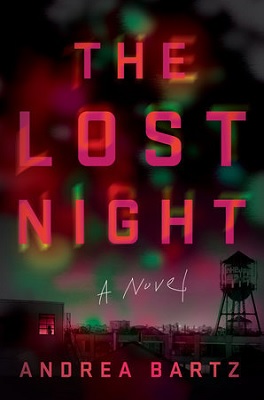 As a teenager I scoffed at elders who insisted that the generation gap was alive and well. They claimed we spoke a different sort of English to them, that the things we were obsessed with were unfathomable, the complications of our lives irrelevant, and the music sucked. Then I recently found myself saying the problem with modern music…. and next thing I know, along comes The Lost Night and I’m mumbling about unfathomable obsessions and these young drama queens…

The Lost Night is very much of it’s era, 2009-2019, and it’s all about central protagonist and first person voice of the novel Lindsay, a 30 something year old party-hard, turned career woman, suddenly thrown back 10 years to the time when her friend Edie died, after a long drunken evening, one of their peer group gone just like that – suicide. She left a note, Lindsay never really questioned it, but it seems that not everyone in their circle of friends was convinced. It’s an interesting premise and it’s a tricky undertaking for readers, as Lindsay is the person that you’re going to have to spend a lot of time in the head of, and she did seem, to somebody not of her generation or background, puerile, self-involved, minutia obsessed – about as tedious a creature as you’d come across. It was enough to make me stare at a wall wondering about the bravery of authors who write such risky characters. Does unlikeable outweigh understandable, is the lack of connection an issue with reader prejudice, perception or connection? Needless to say, it’s a good thing my copy arrived a long time before review due date as a lot of staring has been done.

There doesn’t seem to be any holds barred on the self-obsession of Lindsay, and she is, of course, peak unreliable narrator, a drunk prone to blackouts, she’s forced to admit to herself there’s a big chance she’s wrong about the original verdict, and the idea of murder quickly leads to panic that she might have, in one of her drunken blackouts, been involved. Now a fact-checker for a magazine by trade, Lindsay sets out to discover the truth about Edie’s death, enlisting help from friends, finding supporting evidence and materials, all the time assessing what she really knew about Edie – the girl she idolized, whose death had been a shock – inexplicable but never sinister.

So two potential camps form rapidly – those wondering how she could have been so self-involved at the time, and those with sympathy for the blinkers of young age. As Lindsay’s digging starts to disturb a lot of people, and the storyline fractures into the past and the present, remembrances, documentation, photographs, videos, conversations, all of which are narrated, analysed and considered from Lindsay’s point of view, you’re going to have to make your mind up where you stand on Lindsay pretty quickly. Things do get a bit boggy hereabouts with minutia clogging up plot advancement and a hefty amount of reflection and re-assessment not helping make Lindsay seem any less self-absorbed and obsessed.

Whether you’re on Team Lindsay, or Team Lindsay Needs to Get a Grip, the author has played fair with the reader though, there’s plenty of opportunities for puzzles solvers to work alongside Lindsay, and there’s opportunity to delve into her psyche, motivations, and her inner thoughts, regrets and memories. And therein lies the biggest challenge of The Lost Night – picking your team in a very noisy, distracting environment isn’t as straightforward as you’d like; and unlikeable doesn’t always equate to unfathomable or utterly without worth.