The seniors’ road trip The Leisure Seeker is, if you can believe this, a lighthearted take on dementia. The heavily concocted drama however stretches beyond acceptance.

John and Ella Spencer (Donald Sutherland and Helen Mirren) have almost reached the end of the road. Ella is frail, while John’s memory is failing. Instead of going quietly into that good night however, the Boston 70-somethings flee the suffocating care of their doctors and children Will (Christian McKay) and Jane (Janel Moloney), and hop aboard their vintage campervan, nicknamed “The Leisure Seeker”. They plan to visit the Florida Keys house of John’s hero, Ernest Hemingway. 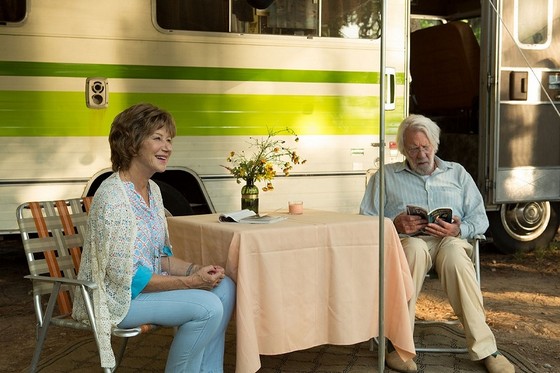 Italian co-writer and director Paolo Virzì makes his first film in America. Michael Zadoorian’s novella provides the source material; although the route in the book was from Detroit to California along the legendary Route 66.

I wasn’t totally sold. Notwithstanding the noble efforts of Mirren and Sutherland to channel their respective sickly characters, the constant back and forth (between being dementia and clarity, between being jealous and in love, between being frustrated and understanding) quickly wore thin. More often than not, the change happened inside a few minutes. Mind you, I have to admit the film and the relationship between the pair grew on me ever so gradually.

I was never comfortable with the portrayal of the couple’s son Will. The hysterical character was grating. I did however like some of the situations the elderly couple found themselves in – at eateries, in nursing homes, with a cop and with opportunistic thieves, to name but a few.

It was like piecing together a series of skits involving the same people, although there were too many skits. I found the nearly two hours running time unnecessary and indulgent.

Moments of poignancy and humour are certainly present throughout. The cinematography (with its diversity of vistas) is impressive. The soundtrack is a beauty, including “Me and Bobby McGee” by Janis Joplin.For all of that, The Leisure Seeker is noticeably manipulative and suffers as a result.