Five years ago, an endlessly optimistic guy named Emmet rose to become The Special in The LEGO Movie. Overcoming his doubts and an apparent lack of any notable skills, this LEGO figure in a bright orange vest bravely followed his destiny. He became a Master Builder and – with the help of his friends – saved the city, won Lucy’s heart and helped make “Everything is Awesome” a dance-party singalong. In The LEGO Movie 2: The Second Part, Emmet still has a spring in his step, but everything else has fallen to pieces. 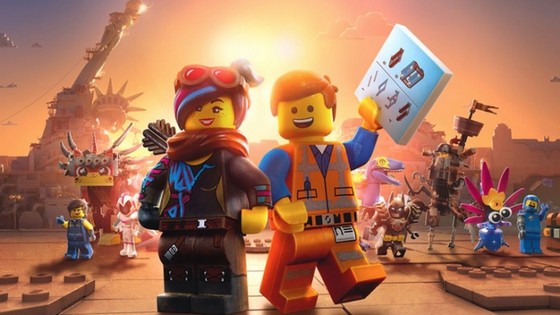 The surprise DUPLO invasion that threatened destruction just behind the first movie’s happy ending has reduced the town of Bricksburg to rubble. It’s now known to its battle-weary citizens as Apocalypseburg. The battle to defeat the invaders and restore harmony to the LEGO universe will take Emmet, Lucy, Batman and their friends to faraway worlds. They include a galaxy filled with fantastic planets, strange characters and catchy new songs.

Reprising their starring roles from the first film are Chris Pratt as Emmet, Elizabeth Banks as Lucy (aka Wyldstyle), Will Arnett as LEGO Batman, Alison Brie as Unikitty, Nick Offerman as MetalBeard, and Charlie Day as Benny. Tiffany Haddish and Stephanie Beatriz appear as new characters: the shapeshifting Queen Watevra Wa’Nabi and General Mayhem, aka Sweet Mayhem. Space cowboy Rex Dangervest – also voiced by Chris Pratt – is another newcomer.

Phil Lord and Christopher Miller, who wrote and directed the first movie, wrote the screenplay; while directing credits this time going to Mike Mitchell (Trolls).

While kids may love the colour and movement in The LEGO Movie 2, following the flip-flopping storyline may test their powers of concentration and patience.

I’m not convinced by the movie’s premise. The scriptwriters shake things up time and again, but all they succeed in doing is giving the film a schizophrenic feel.  And even at an hour and 47 minutes, the film felt blown out. On the plus side I really liked the live action sequences that wrapped up the story.

Batman’s arrogance is a winner; as is the interaction between the ever-cheery Emmet and the feisty Wyldstyle.

I went from hating to loving The LEGO Movie 2 and back again. The one-liners, asides and pop-culture references elevated the picture from being a pedestrian dirge. It’s a pity the filmmakers apparently tried to throw the proverbial kitchen sink at the script; ending up with an uneven offering.