In the late 1960s, an elderly woman took up residence in a London street where many famous names lived. Nothing unusual about that, you might be thinking. But she lived in a decrepit, hand-painted yellow van crammed with old shopping bags and bits of carpet. She was a well-known “character” around Camden Town, sometimes mocked and persecuted by passers-by. When writer Alan Bennett first moved into the same street, this woman, known as Miss Shepherd, was already living in the van. He gradually became aware of her as she and the vehicle drifted down the street, after she systematically outstayed her welcome outside every other house.

Eventually Miss Shepherd became a permanent fixture opposite his home. For a while an understanding Council let Miss Shepherd park the van on the street, but eventually indicated enough was enough and suggested it would have to move her on. That’s when Bennett told her she could relocate the vehicle to his driveway. The van and the lady ended up staying there for 15 years. The Lady in the Van is her story as seen through his eyes. 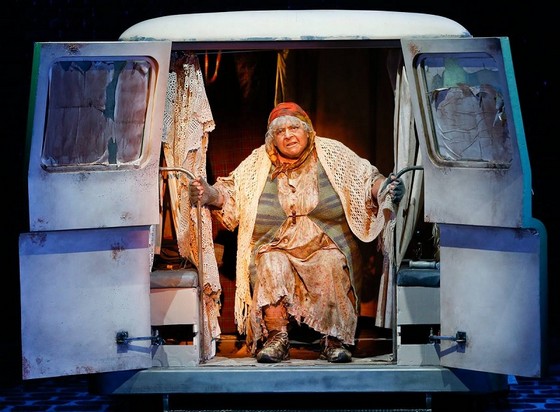 In 1999 Bennett turned his biography into a stage play starring Maggie Smith as Miss Shepherd. Fifteen years later, he revisited the material to produce a screenplay. Now MTC has mounted a theatrical production to start its 2019 season, with the indefatigable Miriam Margolyes in the lead role.

The Lady in the Van is a portrait of an eccentric woman who took over nearly two decades of Bennett’s life. She was a cantankerous, unhygienic vagrant, struggling with mental health and homelessness. The play is the story of their relationship and the strange connection they developed. Strong-willed and fiercely independent, she didn’t smile, and was often short tempered. She never said “thank you” to those who helped her out.

Gradually the play reveals Miss Shepherd’s back-story. She was an accomplished concert pianist who abandoned her music when religious fervour saw her pursue the life of a nun. It suggests the experience damaged her psychologically for the rest of her life. The script also shows sheds light on how she fell out with her family and came to be “on the lam”.

Alan Bennett’s character (played by Daniel Frederiksen and James Millar) is split into two. One is the writer and the other the regular guy – his subconscious self – wrestling with the writer. The pair work seamlessly together on stage. They not only dress alike, but facially are the spitting image of one another.

For Margolyes, in a glittering career that has included several MTC appearances, The Lady in the Van is undoubtedly one of the high points. It’s a flawless performance in which she captures the essence of a sad but proud figure who lived life by her own rules. She also looks the part – like an unmade bed – thanks to tattered garments (the set and costume designer is Alicia Clements) and make-up. 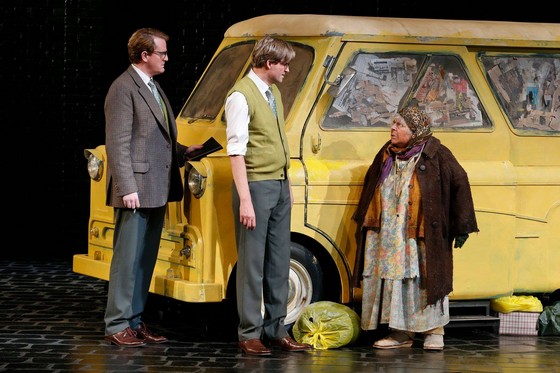 While Miss Shepherd is the primary focus, the quirky characters and the good-natured way in which the story unfolds also help elevate it from the ordinary. The former includes those who lived in Gloucester Crescent – where the play is set – and others who interact with Miss Shepherd. Who would have thought that a woman who was clearly so different, so “out there”, could be allowed to live in squalor in that part of town for so long?

Dean Bryant directs a cast of eight – including a number of actors playing multiple roles. A great deal of thought has clearly gone into the staging of this production. Much moves across and around the stage electronically – a pianist, a chair, fences, a front door and the van itself – during the show to keep the narrative flowing at pace. The Lady in the Van is infused with humour and pathos and is set to delight audiences anew.

It is playing at the Playhouse, Arts Centre Melbourne, until 6 March 2019.

I saw the first preview performance of the production.