Last year Widows took the crime drama genre out of the hands of men and into those of women. The Kitchen tries to do the same thing but fails. 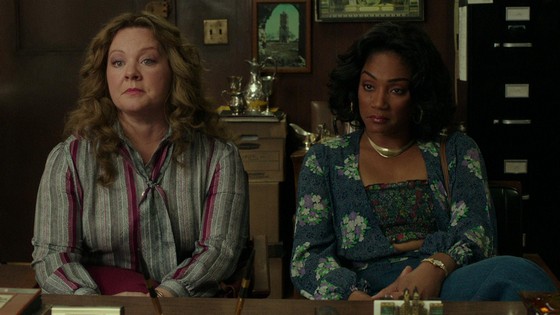 We’re in New York City in 1978. The 20 blocks of pawnshops, porn palaces and dive bars between 8th Avenue and the Hudson River owned by the Irish mafia and known as Hell’s Kitchen was never the easiest place to live. Or the safest. But for mob wives Kathy, Ruby and Claire – played by Melissa McCarthy, Tiffany Haddish and Elisabeth Moss – things are about to take a radical, dramatic turn. Being with the men they are they all bought into the same deal – that their men would take care of them and take care of business. But when their husbands are sent to prison that deal is null and void and the odds quickly stack up against the wives.

The neighbourhood isn’t what is used to be. Revenues are down and competition is cutting in. The remaining members of the gang won’t pony up enough cash to help the women make the rent and put food on the table, so they take matters into their own hands. Suddenly, they are the ones running the rackets and taking out the competition … literally. Now they are in charge.

A lot of what is depicted in The Kitchen lacks credibility. Things seem to happen for the convenience of the narrative arc. That happens from the get-go and doesn’t let up. Imagine three women in a state of desperation gently convincing those paying money to hardened thugs not to do so any more and to pay them instead. It simply wouldn’t happen. Then, a timid, battered wife with $43 in the bank relishing blood and guts violence. Surely not. And, better still, that same woman hopping into bed – figuratively and for real – with a cold-blooded assassin who is making goo goo eyes at her.

The Kitchen is contrived clap trap born of the #MeToo generation. Hey, don’t get me wrong. I’m all for equality, but that doesn’t mean turning out inferior material just for the sake of women taking the lead roles. The script, which is based on a comic book series, needed plenty of work.

Writer and director Andrea Berloff (who was nominated for an Oscar for Original Screenplay for Straight Outta Compton) certainly hasn’t won me over with this effort, aside from the period detail, which is impressive. But overall, there’s not enough heat in The Kitchen.