Pete Davidson was a bit of an unknown quality for me. I was aware he was on Saturday Night Live, and I’d seen some of his stand-up – experiences that frankly left me nonplussed. But he’s been in a heap of movies, even if most of them haven’t been released here. His latest acting foray, The King of Staten Island, includes comedy heavyweight Judd Apatow in the director’s chair. And the result surprised me – but maybe not in the way you might expect. 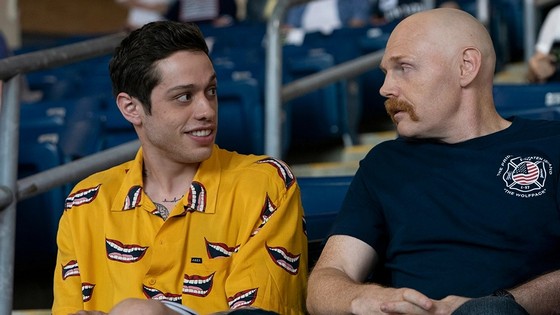 Apatow, of course, helmed the likes of Trainwreck and The 40-Year-Old Virgin. Here he pulls triple duty as director, co-writer (with Davidson and Dave Sirus) and producer. The story itself is loosely based on Davidson’s life, but Apatow steers it in some interesting directions. That said though, don’t go into this expecting a full-on gag-fest. This is film of restrained, even oblique, humour that touches some raw nerves.

As you might have guessed, Staten Island serves as the backdrop. Scott Carlin (Davidson) still lives there with his mum Margie (Marisa Tomei) and sister Claire (Maude Apatow). But Scott’s life drifts aimlessly between smoking pot, playing video games and giving amateur tattoos. His ill-thought-out dream is to open a “tattoo restaurant”. It’s pretty clear from the outset that his dissolute life stems from the death of his father, a firefighter, when Scott was 7 years-old. He struggles with depression; and when Claire heads off to college, Scott’s mood slumps further. But a bizarre encounter with a kid Harold (Luke David Blumm) brings his dad Ray (Bill Burr) to Margie’s door.

Ray’s a firefighter, and soon he’s dating Margie. That doesn’t exactly thrill Scott. But he’s even less impressed when Margie announces she wants Scott to move out so she and Ray can be together.

The King of Staten Island grapples with some heavy issues. Grief, depression and relationships all get an airing. What’s intriguing is the depth with which Apatow explores these situations. I initially struggled to care about Scott. I’m sure I’m not the only one who thought we don’t need another Apatow man-child struggling to grow up. But Apatow builds the film layer by layer, until it goes somewhere quite special by the end.

Bear in mind though, in musical terms, this is not a tightly written, auto-tuned 3-minute pop song. Nup, this is jazz – a kaleidoscope of bits and pieces that builds freely but deliberately into a fully formed composition. It’s almost 2 and a half hours long, so Apatow gives his characters plenty of room to grow.

I mentioned my issues with Davidson; and I still have them. But by the end I felt a lot better about his character Scott than I did 10 minutes in. But this film is really all about the supporting cast. Marisa Tomei is once more exceptional as Margie (even if the character isn’t a million miles away her character in the Spider-Man movies). Bill Burr (The Front Runner) is a perfect foil for Davidson as the tough Ray. And British actor Bel Powley (Mary Shelley) does a perfect NY accent, and gives depth to Kelsey, Scott’s sorta-girlfriend. Look out too for Steve Buscemi who does some nice work as Ray’s captain.

The King of Staten Island is an unexpectedly engaging film, if you’re willing to give it a chance. It represents another step away from Apatow’s earlier broad comedies towards more nuanced and thoughtful filmmaking. So don’t go into this movie thinking it’s going to be another Knocked Up; but enjoy it for what it is.