I’m theatre traditionalist at heart; I don’t like puppets, audience participation…. or magic. So needless to say, The Illusionists: Direct from Broadway is my first (somewhat reluctant) show of its sort. And what a spectacular show I must admit it is. From the moment it begins with The Trickster (Paul Dabek) cheekily pitting two young audience volunteers against each other on stage, it is clear why the franchise is so widely acclaimed (now with tours around the world).

Not only is the show engaging for the young people sitting throughout with mouth open, mind blown expressions and exclamations of ‘what?’ but its captivating theatricality and appealing to adults also. Indeed, it is a great family show with a good balance of adult allusions and child-friendly humour. (As a newbie, what surprised me most was how genuinely funny the show is.) 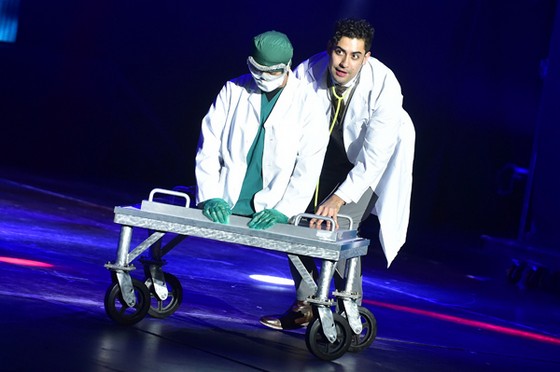 Dabnek is very witty as The Tickster. The award-winning The Mentalist (Chris Cox) is also a dynamic and charming high-energy performer as he reads the minds of audience members, astonishingly revealing obscure, specific details of their everyday lives and histories.

There are many instances of audience participation from ‘volunteers’ of all ages and from across sections of the Concert Hall, not just the ‘business class’ of front row centre, but it is all good-natured and entertaining. These are performers at the pinnacle of their craft, as one would expect from the Direct From Broadway show. And the collective impact of their impressive showmanship is akin to that of a splashy Vegas show, amplified by a thrilling soundtrack (Composer and Musical Director Evan Jolly), punctuated by moments almost out of a Motley Crüe-esque video, complete with smoke machines and scantily-clad women.

The show includes large-scale stunts, levitation, disappearance and daredevilry. And there is a well-balanced mix of acts; there are astonishing numbers of the traditional vaudeville sort alongside more modern magic moments. Double act, The Showman (Mark Kalin) and The Conjuress (Jinger Leigh) perform disappearing/reappearing acts and assistants are cut in half. There are sleight-of-hand card ticks and conjurations from The Manipulator (French-born Florian Sainvet), too, confidently shared courtesy of a large screen positioned above centre stage to show the magic up-close, also while The Alchemist (Leonardo Bruno) floats a rose before our very eyes.

Things become tense in lead in to intermission as the audience holds its collective breath when Australian daredevil Sam Powers (otherwise known as The Enigma), who has joined the Brisbane season, enacts a tribute to Harry Houdini. The can’t look, but can’t look away segment sees him attempting a death defying mid-air straight-jacket escape under a flaming set of steel jaws, ready to be come crashing shut with a half-tonne of brute force. 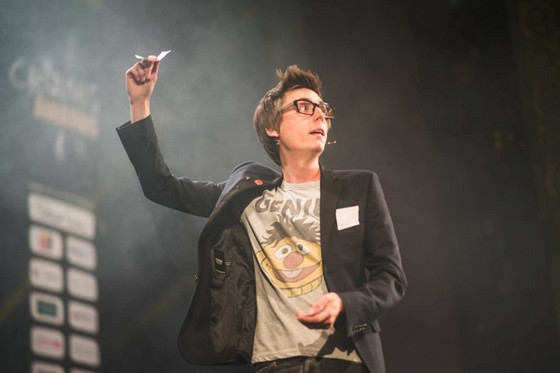 While numbers ebb and flow through the show’s 2+ hour duration, comparatively Act Two falls a little flat. Even though its more sedate numbers are impressive, it would be nice to see it also end with a more memorable bang. Still, in the hands of these masters of magic, the experience of the very best illusion acts from around the world seems to fly by in a flamboyant spectacle of awesome illusions and sharp humour.

Clearly, The Illusionists: Direct from Broadway is not only an impressively sharp and highly entertaining show, but a genuinely joyous experience for audience members of all age that illustrates the verity of Voltaire’s claim of illusion being the first of all pleasures. And as for trying to figure out how they are doing it, such contemplations soon give way to resignation that ‘it’s just magic’ to be enjoyed by young and old alike.

The Illusionists: Direct from Broadway is showing at QPAC, Brisbane from 9 – 19 January 2019