Based on a true story, this is a tale of one man’s obsession to build a monument to his beloved daughter. 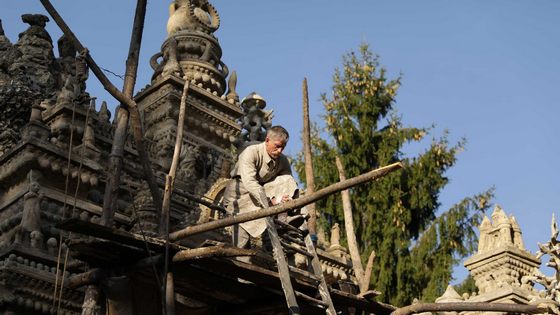 Set in France, the film begins in 1979 and pans some three decades. Joseph Cheval (played by Jacques Gamblin) is a quiet, withdrawn and solitary postman who has just buried his first wife and sent his young son Cyrille away to be raised by relatives. Joseph is a reserved man, not given to outward displays of emotion, and is possibly autistic. He lives in the small rural village of Hauterives and travels several kilometres every day on his rural route delivering letters to the sparse population in the department of Drome.

Then he meets the widow Philomene (Laetitia Casta), marries her and has a daughter named Alice. Unable to express his love for his daughter with words, Joseph begins to construct a magnificent palace dedicated to Alice. Even though he has no formal architectural training or skills he painstakingly builds a massive structure out of the rocks he finds during his travels. For the next 33 years he dedicates himself to the task of constructing the elaborate structure which depicted historical and cultural events inspired by the images he saw on the postcards he delivered. Although Joseph himself is not a very articulate or emotional man he pours his heart and soul into the building.

Meanwhile his life is full of little pleasures and tragedies. Eventually his “ideal palace” came to be officially recognised as an historic monument in 1969, and the extraordinary monument has become something of a popular tourist attraction in the remote rural valley.

The Ideal Palace is the third feature film from Nils Tavernier, the son of acclaimed French filmmaker Bertrand Tavernier. The script from writers Laurent Bertoni (The FInishers, etc) and first-time feature writer Fanny Desmares is simple, straightforward, and understated. Tavernier and his writers have taken some liberties with the story for dramatic purposes. This is deliberately paced film, and although the pacing is a little uneven it effectively tugs at the heartstrings with its emotionally engaging story of obsession, faith, devotion and family.

Tavernier elicits a subtly nuanced performance from Gamblin, who brings a sense of grace and quiet dignity to the largely wordless role. Casta is also good as Cheval’s long suffering but patient and understanding wife.

The film has been superbly shot by cinematographer Vincent Gallot, who gives it a poetic and lyrical beauty, and it looks gorgeous on the big screen. Tavernier effectively conveys the passage of time without resorting to CGI or digital effects.