Brace yourself, the inevitable comparisons are coming! A good-looking group of ten young people awake on a beach, make-up intact, attractively dressed, with no knowledge of how it was that they got there. Or even who they are. Clues are scattered about in the sand near them, and its not too long at all before they are all at each other’s throats. Sound familiar?  Of course it does.  Welcome.  Your Netflix algorithms are likely to blame for your arrival on The I-Land. 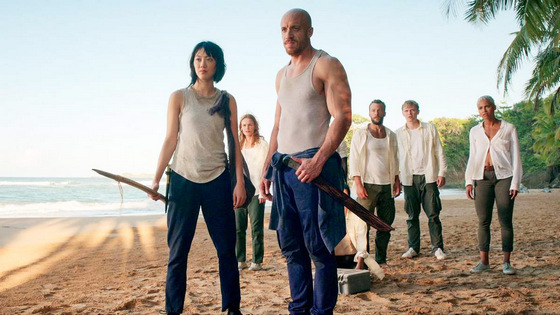 As it was with Lost, the premise of The I-Land is quite delicious and relies heavily on sun, sand and sniping.   All those white shirts and dark pants are quite flattering to our bunch of new young I-Landers who alternate between quite annoyed at having sand between their toes, and being quite charmed by the picturesque setting in which they have found themselves.  To be fair, the beach setting is rather gorgeous and there’s plenty of blue skies and rolling waves to sigh and plan your next holiday over.  It’s everything else that you might struggle to see the point of.

The first couple of episodes of The I-Land centre on the character of Chase (Natalie Martinez), who has the most obvious desire of all her new compadres to get the hell off the island and find out who the puppet master is or what cataclysmic event placed her there. Chase is experiencing a lot of hairy flashbacks to events she can’t yet understand, but they all forebode that yes indeed there’s some shady stuff in her past.  Chase’s island nemesis KC (Kate Bosworth) is understandably also rather cranky at waking up with little to go on, but is more focused on going all Lord of the Flies with her new environment and asserting her dominance over the other I-Landers before seeking some actual answers.  KC’s interactions with Chase don’t give the group much confidence that either woman is going to alpha up and get them all to food and shelter.

Little by little the I-Landers form bonds with each other, test these new bonds, and of course break these new bonds.  It becomes apparent that they are all meant to be doing something about their circumstances but what is that exactly?  Nope, they’ve got nothing.  Well, odd little clues are popping up there’s even a helpfully suggestive sign lodged in the sand that might offer up a bit of clarity. But nope, they’ve still got nothing.

You get the sense that all of the actors in The I-Land have the same thoughts that their characters do, as in how on earth did they end up here.  Interesting cast inclusions were Margaret Colin (Veep), Bruce McGill (too many TV cop shows to list) and Alex Pettyfer (I Am Number Four).  So we do have some very recognizable faces appearing early in the piece, some who could have carried the show on their own had they more screen time and a better script to work with.  There are some very awkward and wooden interactions right up front in episodes one and two that are so baffling the viewer could be forgiven for peering at the edges of scenes to see if they can spot some smoke monsters rolling past or planes dropping out of the sky.

All seven episodes of The I-Land are now streaming on Netflix.