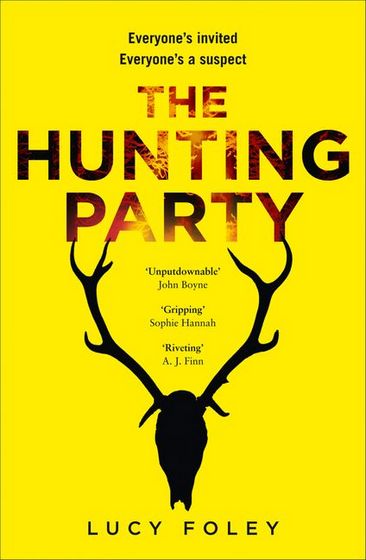 You know those books that pop up so often on your feeds that you begin to feel that the universe (and lots of very savvy literary publicists) would really like you to read them?  This is how I came to read The Hunting Party by Lucy Foley.  Having heard many good things, and with Foley’s second crime novel now in the pipeline for a February release, it was time to find out why so many people latched onto Foley’s first intriguing crime thriller.

Seven friends, most of which went to college together, gather for their traditional New Year’s vacation.  It’s a time to catch up, to see who is leading the pack, to find out who is falling behind. Three couples and one single was never a willing formula and this year it isn’t either.  It is Emma who has planned the annual getaway, and the gorgeous but isolated Scottish highland lodge she chooses is due for a good snowfall.  The group will need to hunker down together and thank heavens there’s plenty of booze and pills to keep the conversation flowing.

When one of the party is found murdered, it’s almost as if it was expected. The seven friends, two staff and two other lodge guests are all in it together until the police are able to reach them.

The Hunting Party presents us with a cast of largely unlikeable characters (which can often be a good thing) as they all come together for auld lang syne and inevitably as the hours draw on, begin to turn on each other like sharks.

When it comes to ‘closed room’ thrillers (ie – one of the ‘survivors’ must also be the killer) this can present challenges and the delivery too of a whole pile of tropes.  The author needs to keep moving with the perspectives so that the readers doesn’t settle too early on one suspect, and possibly bagging and tagging well before the big reveal.  There are little inclusions in The Hunting Party that are a bit obvious, such as a serial killer known to be in the general area, the suspicious returned serviceman, the mysterious landowner etc.  The plot line opt outs are there but with so many relationship dynamics to play with, they were all just distractions.

It will be no surprise to anyone who has read this book to know that The Hunting Party has been optioned for the small screen.  Films and TV shows where holidays with good friends turn murderous are always great fun, and I’m sure a script carved from The Hunting Party would lend itself well to a TV adaptation.

Betrayals, long simmering resentments, collegial mishaps and the promise that someone is going to royally cop it at some point makes for hugely entertaining thriller reading. The Hunting Party was the perfect holiday read to soak up over the New Years period. Nothing like a jolly murder to get us all in the spirit.

The Hunting Party was released in 2019 and is published by Harper Collins Australia.