A darkly comedic, sick and twisted story concerning an extreme job interview to find a perfect hit man or woman, you are highly unlikely to forget this one in a hurry. Six candidates enter a premises without any idea of what they are in for. The agency looking to recruit a new employee is KOC – which stands for Killing On Command.

It is led by a ruthless CEO, Gwen (Cazz Bainbridge), dressed in a hot pink pant suit and jet black heels with her own attack dog, a seemingly humourless assassin (Tim Lancaster). She has been an integral cog in the business operated by her father and his father before him since she was a kid, quickly rising through the ranks and filling several roles.

As you can imagine, it is a business like no other, distinguished by a series of rules. First up, none of the candidates is allowed to use their real names. If they do, they are dead. Instead, all are known as “John”.

The disparate group under the microscope include a two-for-one team (Harry Borland and Eidann Glover) who enjoy inflicting pain. There is a gamer (Raymond Martini) with an encyclopaedic knowledge of guns and a former KOC employee (Michael Argus) looking to get back into the game. Also putting her hand up is a young woman who doesn’t say much until her back story reveals the real reason she is there (Sophia Petridis). Rounding out the prospects is a 25-year-old uni graduate (Will McDonald) who thought he was applying for an administrative position.

Before this is over, we will learn more about each of them and, I assure you, individually and collectively they will be tested in more ways than one. The Hitmen draws pleasure from pain, with laughs aplenty. It becomes a last person standing affair. The characters are alternately desperate and terrified. 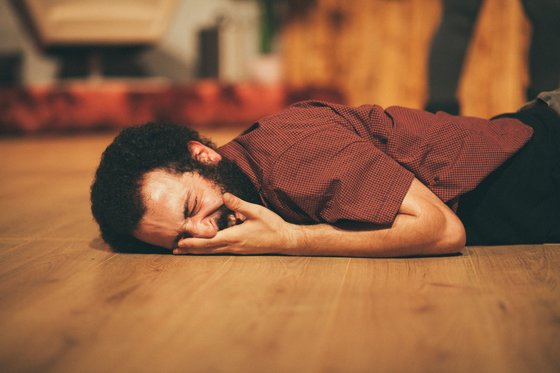 What makes the play more compelling is the psychological shifts that frequently occur. The writing by Mish Wittrup is smart and pithy, the execution strong, if at times a little too forced. Mind you, exaggeration and bravado are the hallmarks of this walk on the wild side. I particularly appreciated Cazz Bainbridge as the perfumed steamroller and Tim Lancaster as her hatchet man.

While the graphic nature of The Hitmen means it will not appeal to all, many will undoubtedly embrace its inherent subversiveness. I liked the fact that it broke traditional lines of acceptability to try to legitimise the unconscionable. Directed by Blake Barnard, it is playing at Theatre Works until 14th March, 2020.