The Happy Prince tells the tragic story of Oscar Wilde’s final days. But this lyrical and poetic film is also harsh and unrelenting.  In short,  it starts with Wilde from his death bed, and traces back what led him there. In a cheap Paris hotel room, the past comes flooding back. He is transported to other times and places. 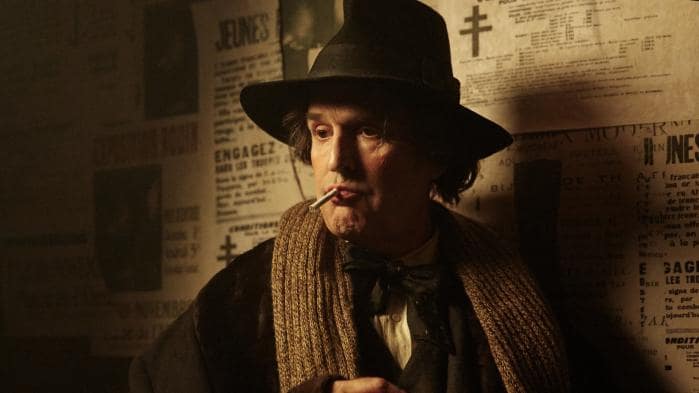 Wilde was once the most famous man in London. He was also an artist crucified by a society that once worshipped him. After his release from jail, he continues to run towards his undoing. He can’t help himself. That includes resuming his relationship with Lord Alfred Douglas (Colin Morgan). By doing so, he continues to torment his long-suffering wife, Constance (Emily Watson), with whom he has two children.

Robbie Ross (Edwin Thomas) desperately tries to save Wilde from himself. By now Wilde is a penniless vagabond, shunned by his old acquaintances. But he’s revered by a strange group of outlaws, outcasts and urchins to whom he tells the old stories. This is a man who would not be silenced, even though he was imprisoned for his gay relationship. He’s gone from being the toast of the town to being seen as a pariah.

The Happy Prince is hard to watch. I’m talking about way Wilde is treated, not the concepts explored in the movie. It jumps back and forth in time. Sometimes it took my brain a few seconds to catch up on what was happening in which time frame. Rupert Everett writes, directs and stars as the great man.

The Happy Prince won’t be universally liked. But still it presents a side of Wilde that’s eye-opening, to say the least.