The Grapes of Wrath is an adaptation of the great American novel by John Steinbeck. Written by Frank Galati, it tells the story of the impoverished Joad family from Oklahoma during the Great Depression. 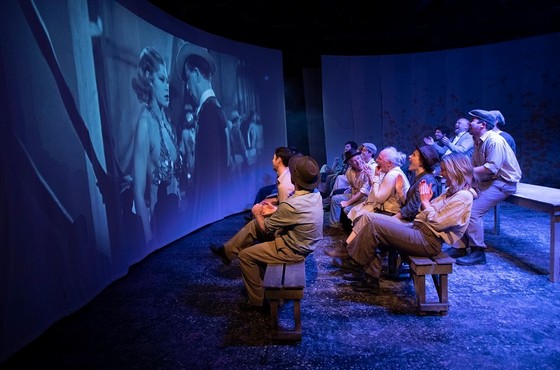 The opening scene could be viewed as a summary of the themes built up during the play. It shows the local townspeople gathering to watch Ginger Rogers singing We’re in the Money, typical of so many Hollywood musicals of the time, designed to give everyone a brief opportunity to forget their daily plights and keep hope alive in their hearts. As all the pretty girls dance with Ginger covered in dollar coins, the good townsfolk laugh and sing along; forgetting the devastation of their land from drought, the foreclosure of bank loans, the hunger pains in their bellies and the inability of government to help. It seems that all they have is their families, God and… California!

The Joads are but one of hundreds of thousands of families forced off their land, clinging to the hope of getting work in seemingly prosperous California. They read about it in a pamphlet and heard rumours of wealth emanating from the vast fields of oranges, peaches and grapes on the West Coast. In fact, Grampa Joad (Peter Irving Smith) dreams of taking a bath in a tub of grapes.

Pa Joad (Andy Simpson) and Ma Joad (Rowena McNicol) decide to pack the barest of essentials on a truck, load the family on board and head west down Route 66. Arriving just in time to join them is son Tom (Matthew Abotomey), recently paroled from prison for manslaughter and ex-preacher Jim Casey (William Baltyn). Jim no longer cares for God, but everyone sees him still as kind and wise. The road trip is a sad journey filled with anguish and disappointment. But on they go, only to find a California seething with greed, deceit, violence and starvation.

Whilst the plot is depressing, the production is something to cheer about. Director Louise Fischer has done a mighty job in taking this story to stage, with a huge cast of 20 and a strong creative team. Set designer Tom Bannerman made use of curtain backdrops as a screen for projected images to create locations and mood. Simple timber chairs and tables doubled as the truck, reminiscent of the Beverly Hillbillies. Costumes by Sharna Graham were period authentic and the dramatics perfectly iterated via lighting (Michael Schell) and sound (David Cashman). 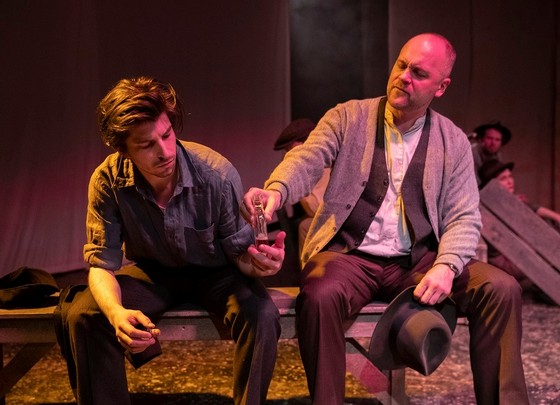 The entire ensemble nailed the sombre atmosphere that this story deserved. Many of the characters were conscious of their own failings and inabilities. Sins plagued their minds but were largely accepted. I felt that the cast really lived their characters.

There’s so much to get out of The Grapes of Wrath. The messages about perseverance in the face of adversity, trust in the family and a belief in self are universal inspirations to find hope. Make the time to see this fine production.

A New Theatre’s production of The Grapes of Wrath is at New Theatre, 542 King Street, Newtown until 7 September 2019. Bookings: www.newtheatre.org.au