A con man tries to fleece a widow; but there’s more here than meets the eye. A crime caper and a dramatic thriller, The Good Liar stars two of the UK’s best known and most beloved actors – Helen Mirren and Ian McKellan. 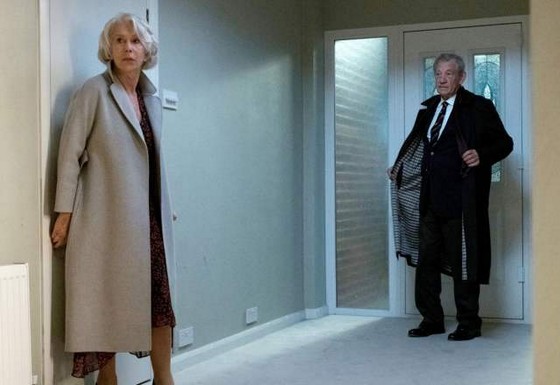 Consummate swindler Roy Courtnay (McKellen) has set his sights on his latest mark: the recently widowed Betty McLeish (Mirren), who is worth millions. And Roy means to take it all. Roy begins plying Betty with his tried and true manipulations. Betty, who seems quite taken with him, is soon going along for the ride. But this time, what should have been a simple scam escalates into a cat-and-mouse game, with the ultimate stakes revealing more insidious deceptions that will take them both through a minefield of danger, intrigue and betrayal.

At first glance it appears the pair – two people in search of something special – have made a genuine connection and have decided to take a chance on one another. But nothing could be further from the truth. From the outset, Betty’s grandson Stephen (Russell Tovey) is suspicious about Roy’s motives, though that doesn’t appear to dampen Betty’s enthusiasm for her new suitor. Roy merely treats Stephen as a slight irritant to overcome with his attentiveness to her. The truth is – for a man who lives by his wits and can’t resist the adrenaline rush of a well-executed, high-stakes con – fleecing wealthy women is something of a side hustle. He usually has more than one iron in the fire.

As director Bill Condon says in his production notes for the film: “The Good Liar is an intriguing look at the dark side of human nature, but often with a glimmer of macabre humour.” Written by Jeffrey Hatcher, who previously collaborated with Condon on Mr Holmes, The Good Liar is based on a novel of the same name by Nicholas Searle.

The contention is set up reasonably well, even if Betty seems too gullible to be true for an educated woman. We – not she – are immediately privy to the two sides of his character, that of a refined and considerate gentleman and a ruthless, amoral, confidence trickster and more besides. The characters around them – on both sides – certainly aid the sting.

There are revelations aplenty as the plot evolves. Just who is playing who and why? We learn more about his background and then about her circumstances.

I dare say McKellan and Mirren had a lot of fun making this picture, revelling in the subterfuge. You could reasonably argue that by the end it became a bit preposterous, but then just think of the fun you had along the way.