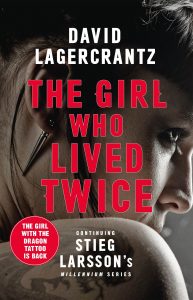 Mikael Blomkvist has good reason to worry about his friend Lisbeth Salander.  Blomkvist has repeatedly been saved by the actions of Salander, so is fully aware of what the enigmatic I.T. genius is capable of when it comes to the crunch.  Concerned that Salander may be intending to pursue those who have repeatedly come after them both in the past, rather than slip away safely into anonymity, the reporter is finding it hard not to operate at his previous active investigation pace and is perhaps more receptive than usual to the possibility of a new diversion.  The Girl Who Lived Twice rides forth with old grudges still not settled and new villians doing their best to lay low.

Blomkvist receives a unexpected call from a coroner about an unidentified street dweller who may have been someone that Blomkvist had once crossed paths with.  Blomkvist is intrigued to find out that the deceased was once a Sherpa guide working on Everest, part of a famously ill-fated climb that resulted in the death of one of its most inexperienced expeditioners.  It was after this tragic climb that the life of the mountain guide spiraled into a vortex of mental illness and homelessness.

Salander indeed cannot let go and is keeping close tabs on her Machiavellian sister and those who are blindly willing to do her bidding.  Nothing terrifies Salander more than inaction and it is with this in mind that she is compelled to continually surveil the shadow people who are caught up in Camilla’s deadly circle of murder and criminal activity.  Keeping a sharp electronic eye on Blomkvist also, Salander has always known who will take priority when both Camilla and Blomkvist are demanding her attention.

Make no mistake, the most compelling reason to pick up The Girl Who Lived Twice is to catch up with what the endlessly fascinating Lisbeth Salander and Mikael Blomkvist are both up to.  These compelling characters have seamlessly made the transition from creator to legacy holder, in that David Lagercrantz has now written a further three books since the original author of the series, Stieg Larsson, passed away.   Readers hardly blinked at picking up book four, and Lagercrantz continues to populate Larsson’s world with the kind of villains that nightmares are made of plus convincingly depict a world where no criminals can escape the efforts of the master computer hackers determined to expose them.

The reader is going to need to keep sharp with the reading of The Girl Who Lived Twice, as the Everest plot line is quite complicated and doubles back on itself as incrementally more is revealed about the relationships between those who chose to make the fateful climb.  Reading about Sherpas and their unique capability to function in high altitude and low oxygen environments was very interesting and this is the first time I’ve encountered Sherpas in fiction. This is a Euro thriller so the cross-nation politics of commerce are again an integral part of the plot, and there are huge potential losses of both face and reputation to some powerful people as long ago covered up cowardly actions are brought to light.

These books continue to be enjoyable rides into some very dark corners of the internet, though there is less techwhiz for Salander to wow us with in this sixth outing of the Millennium series. Also, very little of the newspaper is mentioned here also, though its Editor, Erika Berger, makes a brief appearance.

The ability of both Blomkvist and Salander to take a hell of a kicking, and somehow survive to see another day of hunting bad guys, is as always a heck of a stretch but then if they were true to life, both of them would have laid down and given up a long time ago.  The Girl Who Lived Twice is another solid read in a series that has become quite dear to those who like their crime both clever and vicious, and their victories both redemptive and hard-won.