Ignorance is bliss, they say. And in the case of Fede Alvarez’s The Girl in the Spider’s Web, they might just be right.

The film is a continuation of the so-called Millennium saga, originating from Steig Larsson’s books. You’re probably familiar with The Girl with the Dragon Tattoo, which was made into both Swedish (2009) and American (2011) films of the same name. Larsson had written two sequels, but after his untimely death, David Lagercrantz wrote a new novel, The Girl in the Spider’s Web, using Larsson’s characters and general premise. 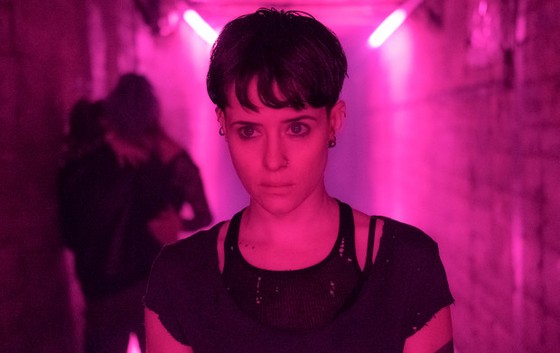 The main problem with this film version is, I gather, it’s not very “true” to the book, which had (predictably) led to some angst on social media. It also produced a similar reaction from fans of the book at the screening I attended. The thing is though, I haven’t read the book, so I went into this with zero expectations. What Alvarez delivers is a serviceable thriller. It’s not great, but it’s not awful either. If you’re a fan of the novel though, you’ve been warned.

Lisbeth Salander (Claire Foy) hides in the shadows of Stockholm. She emerges furtively at night to rescue women from abusive partners; using her hacking skills to find her prey. But those skills bring Lisabeth in contact with Frans Balder (Stephen Merchant), a former NSA operative. He gives her an “impossible” task – which of course Lisbeth can’t resist. Balder developed something called Firefall, a computer program that could be the most dangerous ever. Worried about the Americans’ intentions, Balder wants Lisbeth to steal it off the NSA’s mainframe. When she succeeds however, she sets off a chain of events that will have far-reaching consequences.

Far from the gritty – sometimes horrific – tone of the Swedish films, this plays out like a James Bond movie. In fact, Claire Foy’s take on Lisbeth isn’t far from Daniel Craig’s Bond – a taciturn savant who leaps into furious action when needed. The Girl in the Spider’s Web however bears more than just a passing resemblance to the Bond films. For a start, gaping plot holes appear regularly. Plus it suffers from an under-developed villain and one-dimensional supporting character. And to cap it off, that villain inexplicably decides to bump off the protagonist in the most complicated way possible.

Alvarez – to his credit – though drives the plot straight ahead with gusto if not a lot of finesse. I certainly didn’t find it boring for a second. The wintry Stockholm setting looks great thanks to Pedro Luque’s cinematography.

Claire Foy, I discovered, isn’t physically suited to be Lisbeth Salander (again, according to those book fans); but I’m still not sure why. I however thought she was perfectly fine in the role; although for depth and subtlety it doesn’t really compare to her performance in First Man. Stephen Merchant (Logan) is suitably mousy as the disillusioned NSA man; while Lakeith Stanfield (Get Out) does a good job in a limited role as Needham, the current NSA man on his tail. Sverrir Gudnason is virtually invisible as journalist Mikael Blomkvist; as is Vicky Kreips (Phantom Thread) as Erika Berger. Sylvia Hoeks (Blade Runner 2049) gets the pick of the supporting parts as Lisbeth’s sister Camilla.

Without any baggage to carry, I found The Girl in the Spider’s Web to be diverting entertainment. This isn’t going to win any awards but it’s a solid enough action film. Although it contains some darker elements, this could easily be an enjoyable Saturday night movie. Just don’t read the book before you see it.