A brilliant, intricate script, outstanding direction and superb acting by an A-list cast are the hallmarks of The Gentlemen, one of the year’s best films (I know it comes out on 1st January, 2020, but I reckon I am allowed one day’s leeway). It takes concentration to follow the web of deception woven, but the effort is well and truly rewarded. 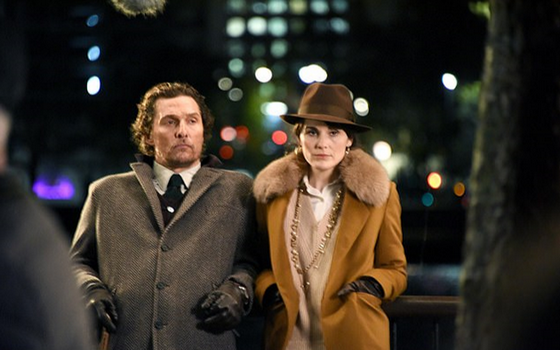 Mickey Pearson (Matthew McConaughey) is an American expat who has built a highly profitable marijuana empire in London. Married to a beautiful and canny woman, Rosalind (Michelle Dockery), he is a smart operator who has managed to hide his operations in plain sight. Now though, he is ready to sell his business to another large operator Matthew (Jeremy Strong).

But when the word gets out that Pearson is looking to cash out, it triggers plots, schemes, bribery and coercion. Among those making a play is a ruthless young Asian tyro, Dry Eye (Henry Golding). The fine detail plays out as low-life Fletcher (Hugh Grant) tries to blackmail Pearson’s right-hand man, Ray (Charlie Hunnam).

I believe The Gentlemen is Ritchie’s best film … in the tradition of Lock, Stock and Two Smoking Barrels (1998). It has also brought out the finest traits in many of his actors. None is better than Hugh Grant, in his boldest (and, arguably, his most enjoyable) portrayal yet. It is the role of his lifetime. The same applies to Charlie Hunnam as the debonair Pearson sidekick, who has to contend with Fletcher’s wheeling and dealing.

I also really appreciated Colin Farrell’s eclectic characterisation of Coach, a mentor to young men from the wrong side of the tracks … with no shortage of street smarts himself. He suddenly – and unexpectedly – becomes beholden to Pearson and is out to pay his debt.

Matthew McConaughey brings a cool arrogance to his persona, matched by Michelle Dockery as his elegant, no nonsense wife. Fresh from nice guys roles, in a decided change of pace Henry Golding channels his dark side.

I was intrigued and heavily involved from go to whoa and would readily see The Gentlemen a second time very soon – it is that good.  It is an example of slick filmmaking from a writer and director who understands what an audience demands of him.

Do not miss it. Rated MA.