The fact The Farewell even exists speaks to two things. First, the power of podcasting; because the movie probably wouldn’t have been made if director Lulu Wang’s real-life story hadn’t been featured on This American Life. And second, the rise of star Awkwafina (Ocean’s Eight) as an acting force. But the film does exist; which is a minor miracle in itself. That’s it’s also this good is a blessing. 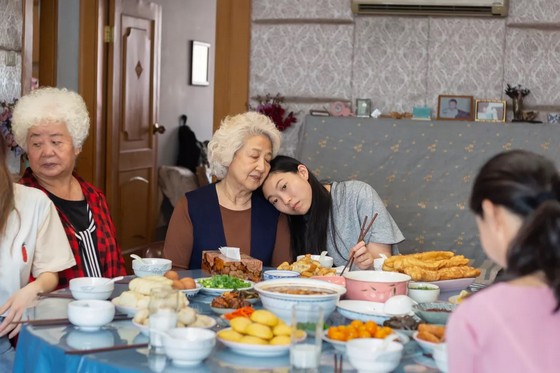 You know you’re in for a ride when the movie opens with the words “Based on an actual lie”. Billi (Awkwafina) is living in New York City. Her parents moved there when she was 6. She still speaks to her grandmother, known as Nai Nai (Shuzhen Zhou) regularly. But at a family dinner, her parents Haiyan (Tzi Ma) and Jian (Diana Lin) reveal Nai Nai is dying. She’s been diagnosed with lung cancer; but the family have decided not to tell her. Instead, they’ve orchestrated a wedding between Billi’s cousin Hao Hao (Han Chen) and his Japanese girlfriend Aiko (Aoi Mizuhara) as an excuse for the family to travel to China and say goodbye. While not “really” invited, Billi decides to go anyway after a professional setback. When she arrives in Beijing however, she faces a dilemma – follow her heart and tell Nai Nai the truth; or toe the family line and keep quiet.

As you might have gathered, The Farewell is a gently funny but deeply emotional film. It moves fairly slowly, but deliberately. Wang doesn’t go for histrionics or sentimentality. Rather she uses this odd situation to explore family dynamics; and the cultural differences between East and West.

As a bit of a film nerd, I have to say this is one of the most beautifully shot films I’ve seen for ages. Wang’s shot composition is exquisite; comparable to say last year’s Cold War. One shot in particular near the end is breathtaking. Anna Franquesa Solano provides the lush cinematography; while Alex Weston furnishes the film with a brilliant accompanying score. Fun fact – as well as writing and directing, Wang plays some of the piano music heard in the film.

The little details matter in this film. Clues are strewn around for the viewer to pick up on. This not only reflects a fine “show, don’t tell” sensibility; but keys into also a central element in the film  – sometimes things are better left unsaid.

Awkwafina – who seems to be everywhere lately – leads the cast magnificently as Billi. She makes great play of the character’s dual identity, and finds the quiet emotional depth the script demands. Tzi Ma, who also seems to get around, is fantastic as the buttoned-down Haiyan. Diana Lin draws the short straw in a difficult role as Jian; but Shuzhen Zhou is utterly charming as Nai Nai.

The Farewell is one of the most carefully crafted film’s of the year. The winning blend of intense emotion, gentle humour and brilliant acting make it a must-see if you enjoy art house cinema.