From The Hunger Games to Divergent, dystopian films aimed at tweens have made serious coin; so why wouldn’t producers keep pouring money into them? They follow a familiar storyline where youngsters are outcasts. And so to the latest incarnation, The Darkest Minds. 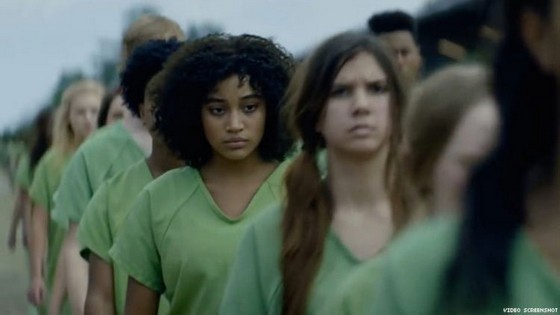 Based on the popular YA novel by Alexandra Bracken, The Darkest Minds starts in a turbulent America where 98% of the children have died of a mysterious disease. The remaining 2% are rounded up and sent to brutal government-run rehabilitation camps. There, they’re segmented based on their intelligence and supernatural abilities.

They’re assigned colours depending upon their powers. Orange is for those who have telepathic abilities; gold can create and control electricity; green have enhanced intellectual capacity; blue can move objects with their minds; and red can generate and manipulate fire. Among those deemed most dangerous is sweet-natured Ruby Daly (Amandla Stenberg). Six years after she was interred, Ruby escapes and joins a band of three others on the run,. They then become the hunted.

The Darkest Minds starts off with certain promise. To be fair though, the idea of a parasite that kills the vast majority of American kids but no adults is out-there. Then the notion of adults rounding up those that remain and transporting them to labour camps presided over by officious jack-booted guards takes that up another notch. If that hasn’t turned you off, the plot devolves into a shameless first love story.

Mind you, it’s not hard to pick the key threads early on, and the four key characters are easy to like. I thought Amandla Stenberg did a decent job as the teen coming to terms with her powers. She exuded warmth, while being somewhat vulnerable and gifted.

Bracken wrote a trilogy, the others being Never Fade and In the Afterlight. I can only hope, based on The Darkest Minds, the other two aren’t turned into films. Sequels are certainly not warranted.

In reality, we have seen it all before and done better. At the helm is Jennifer Yuh Nelson, who directed Kung Fu Panda 2 and 3. This is her first live action feature, and it shows.